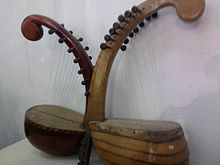 The yazh (Tamil: யாழ், also transliterated yaaḻ) is an harp used in ancient Tamil music which was the ancestor of modern day veena. It was named so, because the tip of stem of this instrument was carved into the head of the mythological animal Yali. It was an open-stringed polyphonous instrument, with gut strings (narambu) with a wooden boat-shaped skin-covered resonator and an ebony stem.

How to play Yazh?

Thiruvalluvar, the 200 BC Tamil poet, mentions yazh in his work Thirukkural. Many major Tamil classical literary masterpieces written during Sangam period dating back 200 BC have mentioned the yazh. Silappatikaram, written by a Tamil king Ilango Adigal, mentions four kinds of yazhs:

Other types of yazh are: