How to play Venu? 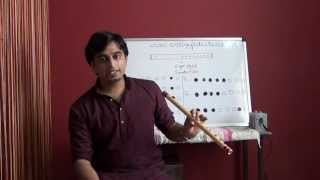 One of the oldest musical instruments of India, the instrument is a key-less transverse flute made of bamboo. The fingers of both hands are used to close and open the holes. It has a blowing hole near one end, and eight closely placed finger holes. The instrument comes in various sizes. The venu is also a highly respected instrument and those who play it are expected to appreciate it, for it is considered a gift to be able to play it.

The flute (Venu) finds great mention in Indian mythology and folklore having been listed as among the 3 original instruments meant for music alongsr with the Saraswati veena and mridangam (veena-venu-mridanga trinity).[citation needed] However it is strange that there is no name mentioned for the typical flute that the Lord plays.

The venu is associated with the Hindu god Krishna, who is often depicted playing it. This kind of flute is mainly used in South India.The Lord Vishnu is portrayed as Sri Venugopala – playing the flute of Creation.

Venu players of the past

Venu players of the present