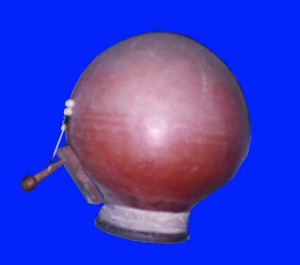 Thanthi Panai (tantipanai or tanti panai) is a pot drum used by tribals of southern India.  It consists of a clay pot with a skin stretched over it.  There is a metal string which attaches to the centre of this skin, then passes through the pot and through a small hole drilled in the bottom.  From here the string passes through a series of beads or wooden blocks, then ties to a tuning peg.  This tuning peg is used to tune to the tonic.  When the instrument is played some small metalic rings which surround the string inside the resonator begin to virate.

The name Thanthi Panai is a reflection of the metal string used in its construction.  It is based upon an older instrument that used gut strings.  This was known as Narakunda Panai.