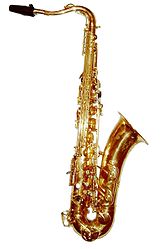 The tenor saxophone is a medium-sized member of the saxophone family, a group of instruments invented by Adolphe Sax in the 1840s. The tenor is one of the two most common types of saxophones, along with the alto. The tenor is pitched in the key of B♭, and written as a transposing instrument in the treble clef, sounding an octave and a major second lower than the written pitch. Modern tenor saxophones which have a high F# key have a range from A♭2 to E5 (concert) and are therefore pitched one octave below the soprano saxophone. People who play the tenor saxophone are known as “tenor saxophonists” or “tenor sax players”.

The tenor saxophone uses a larger mouthpiece, reed, and ligature than the alto and soprano saxophones. Visually, it is easily distinguished by the bend in its neck, or its crook, near the mouthpiece.

The tenor saxophone is commonly used in classical music (such as concert bands, chamber music, and solo repertoire), military bands, marching bands, and jazz (such as big bands, jazz combos, etc.). It is occasionally included in pieces written for symphony orchestra; three examples of this are Ravel’s Boléro, Prokofiev’s suite from Lieutenant Kijé, and Webern’s Quartet for violin, clarinet, tenor saxophone, and piano. In concert bands, the tenor plays mostly a supporting role, sometimes sharing parts with the euphonium, horn, and trombone. In jazz ensembles, the tenor plays a more prominent role, often sharing parts or harmonies with the alto saxophone.

The tenor saxophone was one of a family of fourteen instruments in 1846 by Adolphe Sax, a Belgian-born instrument maker, flautist and clarinetist. A medley of ideas drawn from the clarinet, flute, oboe and ophicleide, the saxophone was intended to form a tonal link between the clarinets and brass instruments found in military bands, an area which Sax considered sorely lacking. Sax’s patent, granted on 28 June 1846, divided the family into two groups of seven instruments, each ranging from sopranino down to contrabass. One family, pitched alternatively in B♭ and E♭, was designed specifically to integrate with the other instruments then common in military bands. The tenor saxophone, pitched in B♭, is the fourth member of this family. 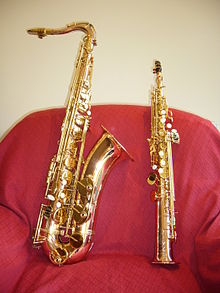 The tenor saxophone, like all saxophones, is in essence an approximately conical tube of thin brass, a type of metal. The wider end of the tube is flared slightly to form a bell, while the narrower end is connected to a mouthpiece similar to that of a clarinet. At intervals down the bore are placed between 20 and 23 tone holes; these are covered by pads which can be pressed onto the holes to form an airtight seal. There are also two small speaker holes which, when opened, disrupt the lower harmonics of the instrument and cause it to overblow into an upper register. The pads are controlled by pressing a number of keys with the fingers of the left and right hands; the left thumb controls an octave key which opens one or other of the speaker holes. The original design of tenor saxophone had a separate octave key for each speaker hole, in the manner of the bassoon; the mechanism by which the correct speaker hole is selected based on the fingering of the left hand (specifically the left ring finger) was developed soon after Sax’s patent expired in 1866. 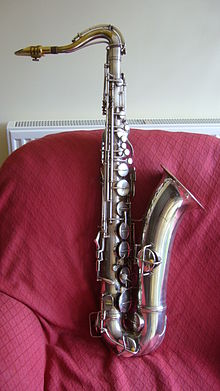 A silver-plated Conn ‘New Wonder’ Series II tenor saxophone, with a serial number which dates manufacture to 1934. It is a very late “Transitional” model tenor sax with split bell-keys, and was manufactured just before production of the Conn 10M started. Leon “Chu” Berry played a tenor saxophone which was very similar to this instrument.

Although a handful of novelty tenors have been constructed ‘straight’, like the smaller members of the saxophone family, the unwieldy length of the straight configuration means that almost all tenor saxophones feature a ‘U-bend’ above the third-lowest tone hole which is characteristic of the saxophone family. The tenor saxophone is also curved at the top, above the highest tone-hole but below the highest speaker hole. While the alto is usually bent only through 80–90° to make the mouthpiece fit more easily in the mouth, the tenor is usually bent a little more in this section, incorporating a slight S-bend.

The mouthpiece of the tenor saxophone is very similar to that of the clarinet, an approximately wedge-shaped tube, open along one face and covered in use by a thin strip of material prepared from the stem of the giant cane (Arundo donax) commonly known as a reed. The reed is shaved to come to an extremely thin point, and is clamped over the mouthpiece by the use of a ligature. When air is blown through the mouthpiece, the reed vibrates and generates the acoustic resonances required to produce a sound from the instrument. The mouthpiece is the area of the saxophone with the greatest flexibility in shape and style, so the timbre of the instrument is primarily determined by the dimensions of its mouthpiece. The design of the mouthpiece and reed play a big role in how a saxophone sounds. Classical mouthpieces generally help produce a warmer and rounder tone, while jazz mouthpieces generally help produce a brighter and edgier tone. Materials used in mouthpiece construction include plastic, ebonite and various metals e.g. bronze, brass and stainless steel.

The mouthpiece of the tenor saxophone is proportionally larger than that of the alto, necessitating a similarly larger reed. The increased stiffness of the reed and the greater airflow required to establish resonance in the larger body means the tenor sax requires greater lung power but a looser embouchure than the higher-pitched members of the saxophone family. The tenor sax reed is similar in size to that used in the bass clarinet, so the two can be easily substituted.

Uses of the tenor saxophone 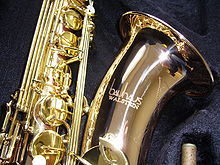 The tenor saxophone first gained popularity in one of its original intended roles: the military band. Soon after its invention, French and Belgian military bands began to take full advantage of the instrument which Sax had designed specifically for them. Modern military bands typically incorporate a quartet of saxophone players playing the E♭ baritone, tenor, E♭ alto and B♭ soprano. British military bands customarily make use only of the tenor and alto saxes, with two or more musicians on each instrument.

The tenor is used in classical music. It is a standard instrument in concert bands and saxophone quartets. It also has a body solo repertoire. The tenor is sometimes used as a member of the orchestra in pieces such as Sergei Prokofiev’s “Romeo and Juliet” and “Lieutenant Kijé Suite” and Maurice Ravel’s “Boléro”. Charles Ives employs a tenor in his Fourth Symphony. Vincent d’Indy wrote for a tenor in his opera Fervaal. The Tenor Saxophone Index, an online repertoire database, was launched in July 2012.

Much of the popularity of saxophones in the United States derives from the large number of military bands that were around at the time of the American Civil War. After the war disused former military band instruments found their way into the hands of the general public, where they were often used to play Gospel music and jazz. The work of the pioneering bandleader Patrick Gilmore (1829–1892) was highly influential; he was one of the first arrangers to pit the brass instruments (trumpet, trombone and cornet) against the reeds (clarinet and saxophone) in the manner which has now became the norm for big-band arrangements.

The tenor saxophone became best known to the general public through its frequent use in jazz music. It was the pioneering genius of Coleman Hawkins in the 1930s which lifted the tenor saxophone from its traditional role of adding weight to the ensemble and established it as a highly-effective melody instrument in its own right.

Many prominent jazz musicians from the 1940s onwards have been tenor players. The strong resonant sound of Hawkins and his followers always in contrast with the light, almost jaunty approach of Lester Young and his school. Then during the be-bop years the most prominent tenor sounds in jazz were those of the Four Brothers in the Woody Herman orchestra, including Stan Getz who in the 1960s went on to great popular success playing the Brazilian Bossa nova sound on tenor saxophone (not forgetting John Coltrane, Dexter Gordon and Sonny Rollins). In recent years, the tenor continues to be very popular with fans of smooth jazz music, being used by notable artists like Kirk Whalum, Richard Elliot, Steve Cole and Jessy J. Saxophonists Ron Holloway and Karl Denson are two of the major proponents of the tenor on the Jam band music scene.

As a result of its prominence in American jazz, the instrument has also featured prominently in other genres, and it’s been said that many innovations in American music were pioneered by tenor saxophonists. The tenor is common in rhythm and blues music and has a part to play in rock and roll and more recent rock music as well as Afro-American, Latin American, Afro-Caribbean, and African music. It has also been used on occasion by many post-punk and experimental bands throughout the UK and Europe in the 1980s, sometimes atonally.