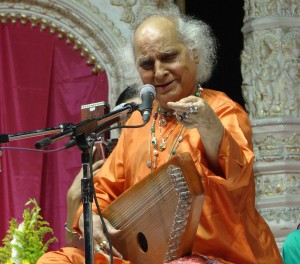 Pandit Jasraj with a swarmandal

The swarmandal ( pronunciation:[s̪ ʋər m ən̪ɖəl̪]; Hindi: स्वरमण्डल;) or Indian harp is an Indian zither that is today most commonly used as an accompanying instrument for vocal Hindustani Classical music. The name combines swara (notes) and mandal (group), representing its ability to produce a large number of notes; it is also known popularly as Sur-mandal. 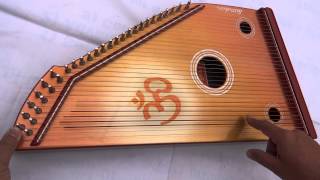 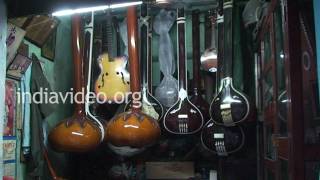 Swarmandals measure from twenty-four to thirty inches in length and twelve to fifteen inches in width. The singer may choose to employ any number of strings from 21 to 36. The strings are hooked in a nail lodged in the right edge of the swarmandal and on the left are wound around rectangular pegs which can be tightened with a special key. Wooden pegs were used instead of metal ones in the medieval period. A sharp half-inch ridge on both sides of the swarmandal stands a little apart from the nails on which the strings are tightened. This ridge functions as a bridge on both sides. The swarmandal is similar to the autoharp or zither in many respects.

The Beatles single “Strawberry Fields Forever” features a swarmandal, played by George Harrison, as does “Within You Without You,” from the Sgt. Pepper’s Lonely Hearts Club Band album.