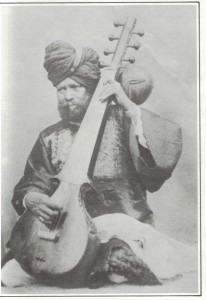 The sursingar (IAST: sursiṅgār), sursringar or surshringar (Sur: Melody in Persian, Sringara: Pleasure in Sanskrit), is a musical instrument from India. It is a lute-derived sarod, except it is larger in size and produces a deeper sound. It precedes the sarod chronologically.

Its neck has a metal fingerboard and the steel and bronze strings are played with a metal pick, while the bridge is made of a flat horn. It has two resonant boxes; the main box is made from a cut gourd, on which a wooden cover is attached. 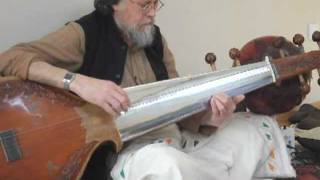 The main body is made of wood and not leather (the material used in earlier instruments). The sound producing mechanism of the instrument is formed by a gourd. The gourd is attached to a hollow wooden handle. The handle is sometimes covered with a metal plate to facilitate the glissando. It has four main strings and four rhythmic drones (chikari). The strings are usually made of brass (instead of catgut used in earlier instruments). These modifications resulted in the increase of resonance in the instrument and thereby in its popularity.

The instrument is supported by the left shoulder, as the veena and is played with a plectrum (mezrab) or tab (and sometimes with a bow). It is used to play music in the Hindustani style Dhrupad.

1. Baba Allauddin Khan had a few recordings as possibly did Pandit