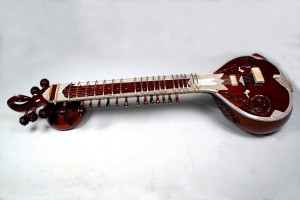 Surbahar, (pronunciation:[s̪ur b əhɑːr ] सुर् बहार्), (literally: “Spring Melody” in Hindi), sometimes known as bass sitar, is a plucked string instrument used in the Hindustani classical music of North India. It is closely related to the sitar, but has a lower tone. Depending on the instrument’s size, it is usually pitched two to five whole steps below the standard sitar, but Indian classical music having no concept of absolute pitch, this may vary.

How to play Surbahar? 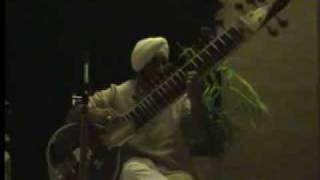 How to play Surbahar
1/1

The surbahar is over 130 cm (51 inches). It uses a dried gourd as a resonator, and has a neck with very wide frets, which allow a glissando of six notes on the same fret through the method of pulling. The neck is made out of tun (Cedrela tuna), or teak wood. It has four rhythm strings (cikari), four playing strings (the broadest 1 mm), and 15 to 17 unplayed sympathetic strings. There are two bridges; the playable strings pass over the greater bridge, which is connected to the tabli with small legs, which are glued in place. The sympathetic strings pass over the smaller bridge which is directly glued on the tabli. The main bridge has a slightly bent upper surface which results in a droning sound, because the vibrating span of the strings quivers ever so slightly. The instrumentalist plays the strings using a metallic plectrum, the mizrab, which is fixed on the index finger of the player’s right hand. Three plectrums are used to play the dhrupad style of alap, jor, and jhala on surbahar. In the dhrupad style, instead of performing the sitarkhani and masitkhani gats, the instrumentalist plays the slow dhrupad composition in accompaniment with pakhawaj. Some researchers believe that surbahar was invented around 1825. Though the invention is generally attributed to Ustad Sahebdad Khan, recent research shows that Lucknow-based sitarist Ustad Ghulam Mohammed may have been the inventor. 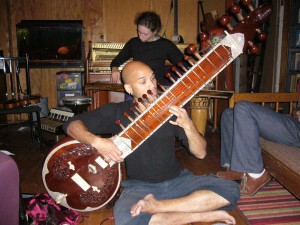