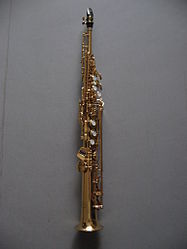 The soprano saxophone is a higher-register variety of the saxophone, a woodwind instrument, invented in the 1840s. The soprano is the third smallest member of the saxophone family, which consists (from smallest to largest) of the soprillo, sopranino, soprano, alto, tenor, baritone, bass, contrabass, and sub-contrabass.

A transposing instrument pitched in the key of B?, modern soprano saxophones with a high F# key have a range from A?3 to E6 and are therefore pitched one octave above the tenor saxophone. Some saxophones have additional keys, allowing them to play an additional F? and G at the top of the range. These extra keys are commonly found on more modern saxophones. Additionally, skilled players can make use of the Altissimo register, which allows them to play even higher. There is also a soprano pitched in C, which is less common and until recently had not been made since around 1940.

The soprano saxophone can be compared to the B? clarinet. Although the clarinet can play a diminished fifth lower and over a fifth higher, the sax produces stronger high notes. Due to the smaller bore of the soprano, it is less forgiving with respect to intonation, though an experienced player will use alternate fingerings or vary breath support, tongue position, or embouchure to compensate. Professional players will use the technique of voicing to fix problems with intonation. Due to its similarity in tone to the oboe, the soprano saxophone is sometimes used as a substitute for it.

In addition to straight sopranos, there are also slightly and fully curved sopranos. The fully curved variety looks much like a small alto saxophone with a straighter crook. There is some debate over the effect of the straight and curved neck, with some players believing that a curved neck on a soprano gives it a warmer, less nasal tone. The soprano has all the keys of other saxophone models (with the exception of the extra ‘A’ on some baritones) and some (e.g. those made by Yanagisawa, Selmer, and Yamaha) may have a top ‘G’ key next to the F-sharp key.

Soprano saxophone mouthpieces are available in various designs, allowing players to tailor their tone as required.

In 2001, François Louis created the aulochrome, a woodwind instrument made of two joined soprano saxophones, which can be played either in unison or in harmony.

The soprano saxophone is mainly used as a solo and chamber instrument in classical music, though it is occasionally used in a concert band or orchestra. It is included in the saxophone quartet and plays a lead role. Many solo pieces have been written for it by composers such as Heitor Villa-Lobos, Alan Hovhaness, Jennifer Higdon, Takashi Yoshimatsu, and John Mackey.

As an orchestral instrument, it has been used in several compositions. It was used by Richard Strauss in his Sinfonia Domestica, where included in the music are parts for four saxophones, including a soprano saxophone in C. It is also used in Maurice Ravel’s “Bolero” and has a featured solo directly following the tenor saxophone’s solo. Vincent d’Indy includes a soprano in his opera Fervaal.

While not as popular as the alto and tenor saxes in jazz, the soprano saxophone has played a role in the evolution of that music. Greats of the jazz soprano sax include 1930s virtuoso Sidney Bechet, 1950s innovator Steve Lacy, and, beginning with his landmark 1960 album My Favorite Things, John Coltrane.