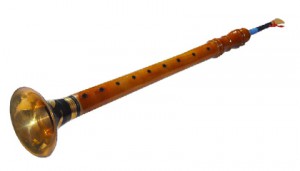 The shehnai, shahnai, shenai or mangal vadya , is a double reed oboe, common in India, Pakistan, Bangladesh and Iran, made out of wood, with a metal flare bell at the end. Its sound is thought to create and maintain a sense of auspiciousness and sanctity and, as a result, is widely used during marriages, processions and in temples although it is also played in concerts. Shenai is similar to South India’s nadaswaram. 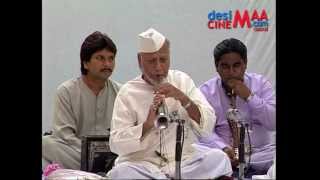 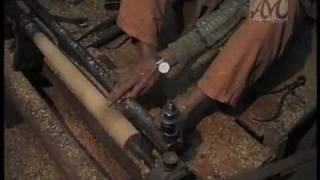 This tubular instrument gradually broadens towards the lower end. It usually has between six and nine holes. It employs one set of quadruple reeds, making it a quadruple reed woodwind. By controlling the breath, various tunes can be played on it.

The shehnai has a range of two octaves, from the A below middle C to the A one line above the treble clef (A3 to A5 in scientific pitch notation).

Origin of the shehnai

The ancestor of North Indian shehnai is believed to be from Persian Surna (Sur = feast, Nai=Ney= flute). The shehnai is thought to have been developed by improving upon the pungi (a woodwind folk instrument used primarily for snake charming).

There are varying legends of the shehnai’s origin. In one of these, a shah initially banned the playing of the pungi in his court due to its shrill sound. A

1. derived from the combination of the Persian words shah (king), and nai (reed, flute) to give the meaning “the king’s flute”.
2. named after a shehnai player called shehinaia,
3. derived from sheh (breath) and nai (flute), or

Another theory of the origin of the shehnai is that the name is a modification of the word “sur-nal”. The word nal/nali/nad is used in many Indian languages to mean pipe or reed. The word “sur” means tone or tune—musical note or simply music—and is used as a prefix to the names of many Indian instruments. The “sur-nal” is said to have given its name to the “surna/zurna” which is the name by which the reed-pipe is known throughout the Middle East and eastern Europe. Shehnai is usually played at traditional North Indian weddings and is associated with the bride leaving her parental house for her husband’s house. Sometimes, two shehnais can be tied together, making it a double shawm similar to the ancient Greek aulos.

Whereas the counterparts played in West Indian and Coastal Karnataka are indigenous to the territory. Shenai players were/are an integral part of Goan/Konkani and temples along the western coast and the players are called as Vajantri and they were allotted lands for services rendered for the temples.