A sarinda is a stringed Indian and Nepali folk musical instrument similar to lutes or fiddles. It is played with a bow and has between three and thirty strings depending on the region. The bottom part of the front of its hollow wooden soundbox is covered with animal skin. It is played while sitting on the ground in a vertical orientation.

The sarinda seems to have its origin in tribal fiddle instruments called “Dhodro Banam” found throughout in central, north-western and eastern India. It is an important instrument in the culture and religion of the tribal Santhals of West Bengal, Bihar and Odisha.

How to play this instrument? 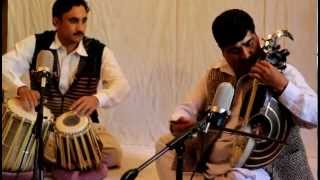 Sarangi is an off shoot of Sarinda. This instrument was introduced to and popularized in Sikh devotional music by Sikh Guru Arjan Dev.

Several ethnic groups of India, e.g. Bauls of Bengal, the folk artists of Rajasthan, Assam and Tripura, use the sarinda in their traditional music and dance. It is the sole accompaniment for a soloist or group folk singer(s).