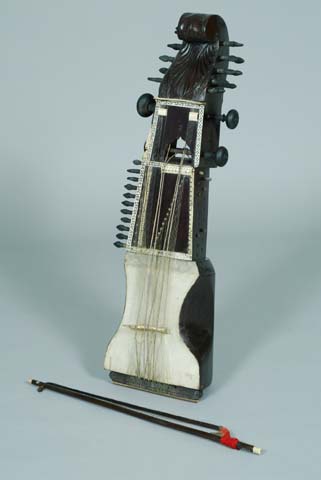 The sārangī (Hindi: सारंगी, Urdu: سارنگی‎) is a bowed, short-necked string instrument from South Asia which is used in Hindustani classical music. It is said to most resemble the sound of the human voice – able to imitate vocal ornaments such as gamaks (shakes) and meends (sliding movements).

How to play Sarangi? 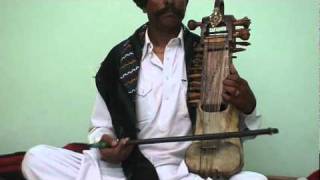 How to make Sarangi? 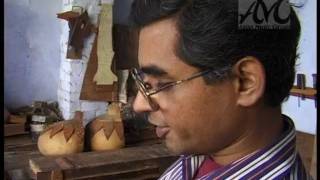 There are different versions for the meaning and origins of “sarangi” The word “sarangi” could be a combination of two sanskrit words: “saar” (summary) and “ang” (form, herein different styles of playing instrumental music for e.g. “gayaki ang”) hence meaning the instrument that can summarize every style of music or playing.”Sarang” in fact has a number of meanings in Sanskrit.

According to some musicians, the word sarangi is a combination of two words ‘seh’(Persian equivalent of three) and ‘rangi’ (Persian equivalent of colored) corrupted as sarangi. The term seh-rangi represents the three melody strings.However the most common folk etymology is that sarangi is derived from ‘sol rang'(a hundred colours) indicating its adaptability to many styles of vocal music, its flexible tunability, and its ability to produce a large palette of tonal colour and emotional nuance.

However Ustad Bundu Khan (the nephew of Mamman Khan(, widely said to be the greatest sarangi player of all time, was well known as a soloist. And sarangi players, although normally employed as accompanists to vocal music and dance, have always played and taught a solo performance style based on vocal music.

The repertoire of sarangi players is traditionally very closely related to vocal music. Nevertheless, a concert with a solo sarangi as the main item will sometimes include a full-scale raag presentation with an extensive alap (the unmeasured improvisatory development of the raga) in increasing intensity (alap-jor-jhala) and several compositions in increasing tempi called bandish. As such, it could be seen as being on a par with other instrumental styles such as sitar, sarod, and bansuri.

Sarangi music is often vocal music. It is rare to find a sarangi player who does not know the words of many classical compositions. The words are usually mentally present during performance, and performance almost always adheres to the conventions of vocal performance including the organisational structure, the types of elaboration, the tempo, the relationship between sound and silence, and the presentation of khyal and thumri compositions. The vocal quality of sarangi is in a quite separate category from, for instance, the so-called gayaki-ang of sitar which attempts to imitate the nuances of khyal while overall conforming to the structures and usually keeping to the gat compositions of instrumental music. (A gat is a composition set to a cyclic rhythm.)

The sarangi is also a traditional stringed musical instrument of Nepal, commonly played by the Gaine or Gandarbha ethnic group but the form and repertoire of sarangi is more towards the folk music as compared to the heavy and classical form of repertoire in India.

Carved from a single block of tun (red cedar) wood, the sarangi has a box-like shape with three hollow chambers: pet (stomach), chaati (chest) and magaj (brain). It is usually around 2 feet (0.61 m) long and around 6 inches (150 mm) wide though it can vary as there are smaller as well as larger variant sarangis as well. The lower resonance chamber or pet is covered with parchment made out of goat skin on which a strip of thick leather is placed around the waist (and nailed on the back of the chamber) which supports the elephant-shaped bridge that is made of camel or buffalo bone usually (made of ivory or Barasingha bone originally but now that is rare due to the ban in India). The bridge in turn supports the huge pressure of approximately 35–37 sympathetic steel or brass strings and three main gut strings that pass through it. The three main playing strings – the comparatively thicker gut strings – are bowed with a heavy horsehair bow and “stopped” not with the finger-tips but with the nails, cuticles and surrounding flesh. (talcum powder is applied to the fingers as a lubricant). The neck has ivory/bone platforms on which the fingers slide. The remaining strings are resonance strings or tarabs (see: sympathetic strings), numbering up to around 35–37, divided into 4 “choirs” having two sets of pegs, one on the right and one on the top. On the inside is a chromatically tuned row of 15 tarabs and on the right a diatonic row of 9 tarabs each encompassing a full octave plus 1–3 extra notes above or below that. Both these sets of tarabs pass from the main bridge to the right side set of pegs through small holes in the chaati supported by hollow ivory/bone beads. Between these inner tarabs and on the either side of the main playing strings lie two more sets of longer tarabs, with 5–6 strings on the right set and 6–7 strings on the left set. They pass from the main bridge over to two small, flat and wide table like bridges through the additional bridge towards the second peg set on top of the instrument. These are tuned to the important tones (swaras) of the raga. A properly tuned sarangi will hum and cry and will sound like melodious meowing, with tones played on any of the main strings eliciting echo-like resonances. A few sarangis use strings manufactured from the intestines of goats — these harken back to the days when rich musicians could afford such strings.

Modern performers who have used sarangi in compositions