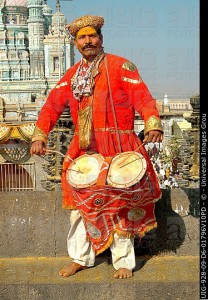 The sambal is a folk membranophone instrument from Western India. It consists of two wooden drums united from a side, with skin heads stretched on their top mouths. One drum is higher in pitch than the other one. This instrument is played with two wooden sticks, one beater having a circular tip. The sambal is also a traditional drum of the Gondhali people and the konkani people.

Sambal is a traditional instrument used by the peoples who are servants of goddess Mahalaxmi Devi and used in the gondhal pooja.

If the Gondhadi’s crescendo and the accompanying rhythmic and vigorous drumbeats of the sambal cast a spell on the audiences all through a long cold night, it only means the old folk form continues to go strong. Gondhad singing, showcased at Adilabad’s Kala Ashram during the just concluded Kala Vishwa Darshanam, is one of the aspects which depicts the strong cultural life in Maharashtra and within the large Maratha community in Adilabad district.

Loosely translated, Gondhad means din, which the musical rendition is in a way as it is meant to keep the listeners awake, entertained and focussed throughout a night of ceremonies. The performance is held usually in a household during auspicious occasions like weddings where an aupicious ceremony like a wedding is being held.

“The families which have Goddesses Tulja Bhavani, Amba Devi or Renuka Devi etc as ‘kul devi’ organise Gondhad singing on a wedding or any other auspicious ceremony. The Gondhadi, as the singer is called, invokes the goddess and ancestors in the family to seek their blessings,” says Prabhakar Pusadkar from Maghan Sangrahalay in Wardha, Maharashtra, as he explains the finer aspects of the folk tradition.

The tradition is strong in parts of Yavatmal and Nanded districts in Maharashtra which share their boundaries with Adilabad. Hundreds of Maratha families in this district have Goddess Amba Mata of Kelapur in Yavatmal and Goddess Renuka Devi of Mahore in Nanded as kul devis which is why the Gondad reverberates in Adilabad too.

“Another form of Gondhad has a troupe of Gondhadis singing and dancing. But the sambal, the twin kettledrum percussion instrument is common to both the types of Gondhad,” Sunil Deshpande from Lavadha in Amaravati district adds.

“The invocation of the Goddesses and the ancestors is done through holy songs that could vary during individual performances and from region to region. However, the basic principle for such invocation remains seeking peace and prosperity in the household,” Mr. Prabhakar says.