It has a long tubular body made of wood or bamboo with a length between 54 and 62 inches. Two large, round resonators, made of dried and hollowed gourds, are attached under the tube. Twenty-four brass-fitted raised wooden frets are fixed on the tube with the help of wax. There are 4 main strings and 3 chikari strings.

As Rudra is a name for the Hindu god Shiva, rudra vina literally means “the veena dear to Shiva”.

How to play Rudra Veena? 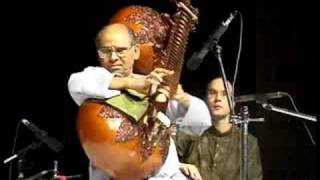 How to play Rudra veena
1/1

How to make Rudra Veena? 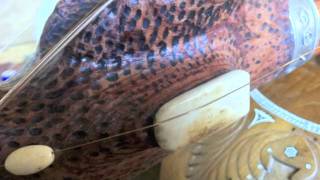 How to make Rudra Veena
1/1

It is an ancient instrument rarely played today. The rudra veena declined in popularity in part due to the introduction in the early 19th century of the surbahar, which allowed sitarists to more easily present the alap sections of slow dhrupad-style ragas. In the 20th century, Zia Mohiuddin Dagar modified and redesigned the rudra veena to use bigger gourds, a thicker tube (dandi), thicker steel playing strings (0.45-0.47 mm) and closed javari that. This produced a soft and deep sound when plucked without the use of any plectrum (mizrab). The instrument was further modified as the shruti veena by Lalmani Misra to establish Bharat’s Shadja Gram and obtain the 22 shrutis.