Nadaswaram is a wind instrument originated in the state of Tamil Nadu. The nadaswaram, nagaswaram, nadhaswaram or nathaswaram, is one of the most popular classical musical instruments in Tamil Nadu, Andhra Pradesh, Karnataka, and Kerala. It is the world’s loudest non-brass acoustic instrument. It is a wind instrument similar to the North Indian shehnai but much longer, with a hardwood body and a large flaring bell made of wood or metal.

How to play Nadaswaram? 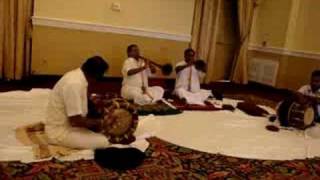 How to play Nadaswaram
1/1

In Tamil Hindu culture, the nadaswaram is considered to be very auspicious, and it is a key musical instrument played in almost all Hindu weddings and temples of the South Indian tradition. It is part of the family of instruments known as mangala vadya. The instrument is usually played in pairs, and accompanied by a pair of drums called thavil; it can also be accompanied with a drone from a similar oboe called the ottu.

The Nadaswaram is originated in the Indian State of Tamil Nadu. It is also referred to in many ancient Tamil texts. Silappatikaram refers to an instrument called “vangiyam”. The structure of this instrument matches that of Nadaswaram. Since there are seven holes played with seven fingers this was also called as “Ezhil”. This instrument, too, is widely played in Tamil Nadu and popular among the Tamil Diaspora.

The nadaswaram contains three parts namely, kuzhal, thimiru, and anasu.[clarification needed] It is a double reed instrument with a conical bore which gradually enlarges toward the lower end. The top portion has a metal staple (mel anaichu) into which is inserted a small metallic cylinder (kendai) which carries the mouthpiece made of reed. Besides spare reeds, a small ivory or horn needle is attached to the instrument, and used to clear the reed of saliva and other debris and allows free passage of air. A metallic bell (keezh anaichu) forms the bottom end of the instrument.

Traditionally the body of the nadaswaram is made out of a tree called aacha, although nowadays bamboo, sandalwood, copper, brass, ebony and ivory are also used. For wooden instruments, old wood is considered the best, and sometimes wood salvaged from demolished old houses is used.

The nadaswaram has seven finger-holes, and five additional holes drilled at the bottom which can be stopped with wax to modify the tone. The nadaswaram has a range of two and a half octaves, similar to the Indian bansuri flute, which also has a similar fingering. Unlike the flute where semi and quarter tones are produced by the partial opening and closing of the finger holes, in the nadaswaram they are produced by adjusting the pressure and strength of the air-flow into the pipe. Due to its intense volume and strength it is largely an outdoor instrument and much more suited for open spaces than for indoor concerts.

American composers such as Lewis Spratlan have expressed admiration for the nadaswaram, and a few jazz musicians have taken up the instrument: Charlie Mariano (b. 1923) is one of the few non-Indians able to play the instrument, having studied it while living in India. Vinny Golia, J. D. Parran, and William Parker have performed and recorded with the instrument.[citation needed] The German saxophonist Roland Schaeffer also plays it, [unreliable source?] having studied from 1981 to 1985 with Karupaia Pillai. Nachimuthu Mudaliar sang many songs with nadaswaram in Chennimalai town, Erode district of Tamil Nadu state.