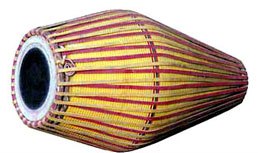 The Mridangam (“மிருதங்கம்” in Tamil) is a percussion instrument from India of ancient origin. It is the primary rhythmic accompaniment in a Carnatic music ensemble. Alternate spellings include “mrudangam”, “mrdangam”, “mritangam” and “miruthangam in Tamil”.

The mridangam is also played in Carnatic concerts in countries outside of India, including Sri Lanka, Singapore, Malaysia, Australia, United Kingdom, Canada, and the United States. During a percussion ensemble, the mridangam is often accompanied by the ghatam, kanjira, and the morsing. The mridangam is nicknamed as the “King of Percussion”.

Etymology
The word “Mridangam” is Sandhi or union of the two Sanskrit words mŗda (clay or earth) and anga (body), as early Mridangam were made of hardened clay.

History
In ancient Hindu sculpture, painting, and mythology, the mridangam is often depicted as the instrument of choice for a number of deities including Ganesha (the remover of obstacles) and Nandi, who is the vehicle and follower of Shiva. Nandi is said to have played the mridangam during Shiva’s primordial tandava dance, causing a divine rhythm to resound across the heavens. The mridangam is thus also known as “Deva Vaadhyam,” or “Divine Instrument”.

Over the years, the mridangam evolved to be made of different kinds of wood due to its increased durability, and today, its body is constructed from wood of the jackfruit tree. It is widely believed that the tabla, the mridangam’s Hindustani musical counterpart, was first constructed by splitting a mridangam in half. With the development of the mridangam came the tala (rhythm) system. The system of talas (or taalams) in Carnatic music may be the most complex percussive rhythm system of
any form of classical music .

Mridangam has a large role in Newa music. One of the earliest Nepal Bhasa manuscripts on music is a treatise on this instrument called Mridanga anukaranam.
The importance of a beating has changed over the years. In the old days, percussionists only used to accompany the lead player like the vocalist but this time their development is not restricted to accompaniment only but also to play one instrument shows.

Tamil culture
In Tamil culture, it is called a tannumai. The earliest mention of the mridangam in Tamil literature is found perhaps in the Sangam literature where the instrument is known as ‘tannumai’. In later works like the Silappadikaram also we find detailed references to it as in the Natyasastra.[3] During the Sangam period, it was one of the principal percussion instruments to sound the beginning of war along with murasu (முரசு), tudi (துடி) and parai (பறை) because it was believed that its holy sound will deflect enemy arrows and protect the King. During the post-Sangam period, as mentioned in the epic Silappadikaram (சிலப்பதிகாரம்), it formed a part of the antarakoṭṭu (அந்தரக்கொட்டு) – a musical ensemble at the beginning of dramatic performances that would later develop into Bharathanatyam.

Construction
The mridangam is a double-sided drum whose body is usually made using a hollowed piece of jackfruit wood about an inch thick. The two mouths or apertures of the drum are covered with a goatskin and laced to each other with leather straps around the circumference of drum. These straps are put into a state of high tension to stretch out the circular membranes on either side of the hull, allowing them to resonate when struck. These two membranes are dissimilar in width to allow for the production of both bass and treble sounds from the same drum.

The combination of two inhomogeneous circular membranes allows for the production of unique and distinct harmonics. Pioneering work on the mathematics of these harmonics was done by Nobel Prize–winning physicist C. V. Raman.

Methods of use
Immediately prior to use in a performance, the leather covering the wider aperture is made moist and a spot of paste made from rice flour and water is applied to the center, which lowers the pitch of the left membrane and gives it a very powerful resonating bass sound. The artist tunes the instrument by varying the tension in the leather straps spanning the hull of the instrument. This is achieved by placing the mridangam upright with its larger side facing down, and then striking the tension-bearing straps located along of circumference of the right membrane with a heavy object. A wooden peg is sometimes placed between the stone and the mridangam during the tuning procedure to ensure that the force is exerted at precisely the point where it is needed. Striking the periphery of the right membrane in the direction toward the hull raises the pitch, while striking the periphery from the opposite side (away from the hull) lowers the pitch. The pitch must be uniform and balanced at all points along the circumference of the valanthalai for the sound to resonate perfectly. The pitch can be balanced with the aid of a pitch pipe or a tambura.

The larger membrane can also be tuned in a similar manner, though it is not done as frequently. Note that since the leather straps are interwoven between both the smaller and larger aperture, adjusting the tension on one side often can affect the tension on the other.

The mridangam rests upon the right foot and ankle, the right leg being slightly extended, while the left leg is bent and rests against the hull of the drum and against the torso of the artist. For a left-handed percussionist, the legs and hands are switched.

Advanced strokes:
Many other strokes are also taught as the training becomes more advanced, which are generally used as aesthetic embellishments while playing. These notes include gumki (or gamakam), and chaapu. The combination of these finger strokes produces complex mathematical patterns that have both aesthetic and theoretical appeal.

Increasingly complex calculations (kanakku) and metres (nadais) may be employed when the mridangam is played.

Ta: A sharp flat note played with the index finger in the middle of the black portion on the right side of the mridangam.
Gumukki: Bass tone produced by playing on the inner layer of the lower end of the left hand side. Sound is produced only when there is a special applied paste.
Full Chapu: It is a vibrating tone played with the small finger on the right hand side, between the black patch and the outer layer. The sound is tuned to the tonic of the tambura.
Ara Chapu: A note similar to Chapu, but is an octave higher, and is played with the side of the hand and less of the pinky.
Dheem: A vibrational tone version of Dhi.

Classically, training is by dharmic apprenticeship and includes both the yoga of drum construction and an emphasis on the internal discipline of voicing mridangam tone and rhythm both syllabically and linguistically, in accordance with Rigveda, more than on mere performance.

Modern usage
Today the mridangam is most widely used in Carnatic music performances. These performances take place all over Southern India and are now popular all over the world. As the principal rhythmic accompaniment (pakkavadyam), the mridangam has a place of utmost importance, ensuring all of the other artists are keeping their timing in check while providing support to the main artist. One of the highlights of a modern Carnatic music concert is the percussion solo (thani avarthanam), where the mridangam artist and other percussionists such as kanjira, morsing, and ghatam vidwans exchange various complex rhythmic patterns, culminating in a grand finale where the main artists resumes where he or she left off.

Mridangam is used as an accompanying instrument in Yakshagana Himmela (orchestra) where it is called Maddale. However, Mridangam used in Yakshagana is markedly different in structure and acoustics from the ones used in Carnatic music.

Players
Over the years and especially during the early 20th century, great maestros of mridangam also arose, inevitably defining “schools” of mridangam with distinct playing styles. Examples include the Puddukottai school and the Thanjavur school. The virtuosos Palani Subramaniam Pillai, Palghat Mani Iyer, C.S. Murugabhupathy, and Late Sri Mahadevu Radha Krishna Raju contributed so much to the art that they are often referred to as the Mridangam Trinity.