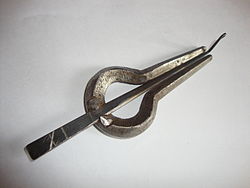 A morsing (also mukharshanku, mourching, morching or morchang, Rajasthani: मोरचंग, Tamil: நாமுழவு அல்லது முகச்சங்கு,malayalam : മുഖർശംഖ്, English: Jaw Harp) is a wind percussion instrument, mainly used in Rajasthan, in the Carnatic music of South India and in Sindh (Pakistan). It can be categorized under lamellophones, which is in the category of plucked idiophones. It consists of a metal ring in the shape of a horseshoe with two parallel forks which form the frame, and a metal tongue in the middle, between the forks, fixed to the ring at one end and free to vibrate at the other. The metal tongue is bent at the free end in a plane perpendicular to the circular ring so that it can be struck and is made to vibrate. This bent part is called the trigger.

Its origin in India is not very clear though many myths and stories prevail. In India it is found mainly in South India, Rajasthan and also in some parts of Assam. In South India, it features in Carnatic concerts and percussion ensembles. In Rajasthan it is called morchang and is used as percussion instrument in folk music.

How to play Morsing? 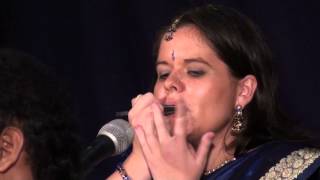 How to play Morsing 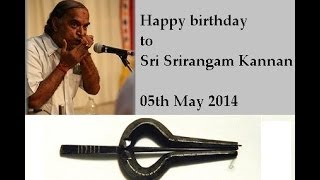 The morsing is placed between the teeth and held firmly in the hand and is struck using the other hand to produce sound. Movement of the player’s tongue, variations of the throat and blowing and sucking of air through the instrument produces different sounds or overtones.

The morsing is firmly held in the hand, the frame or the ring between the palm and the fingers usually in the left hand. Care should be taken to see that the middle part or the metal tongue is not being touched when held idle. Then the upper of the two parallel forks is gently pressed against the front upper teeth; the lower fork, against the front lower teeth, so that the metal tongue will not contact the teeth when it moves. The trigger is plucked with the tip of the index finger. Sound is produced due to the vibration of the metal tongue of the morsing in the mouth and the throat cavity. Movement of the player’s tongue with constant plucking can produce very fast patterns of sound. By constricting the space in the mouth and throat many variations of sound can be produced.

Advanced playing and the art of accompaniment

As the morsing is played most of the time along with the mridangam, it is necessary to know the syllables or aural interpretation of what is played on mridangam. It is important to know the aural representation of the ferns (pattern of syllables played on percussion instruments) played on mridangam as it is being silently recited while playing the morsing. This vocal art of reciting the syllables played on the mridangam is called konnakol. But while playing on morsing you don’t actually make sound of reciting the syllable but just move your tongue that way so that the air passages gets blocked and cleared in a pattern so as to produce the sound of the ferns. It is essential to follow the mridangam and play the same ferns as far as possible, though it is difficult owing to the limitations of the instrument.

Glimpses of uniqueness and versatility of the morsing can be shown when accompanying singly for the song or during neraval or swara prastara (stages of song rendition in Carnatic music). The morsing is played as a shadow of the mridangam throughout the concert and the instrument’s capabilities should be exhibited when playing or accompanying alone or during Thani (percussion round in a concert) or talavadyas (percussion ensembles).