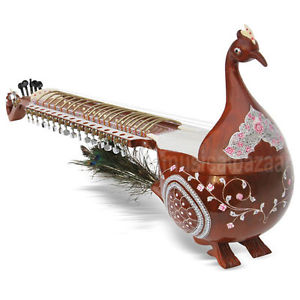 The Mayuri Vina or Taus is a bowed string instrument from the north and central India, as well as from the Punjab which is divided into Pakistani Punjab and Indian Punjab. Taus was the work of Sri Guru Hargobind Ji (the sixth Guru of the Sikhs). From this instrument originates the lighter dilruba. It has a peacock body sound box (‘taus’ is a Persian word meaning peacock) and a neck with 20 heavy metal frets. This neck holds on a long wooden rack 28-30 strings and the instrument is played with a bow. This instrument projects a sound with a deeper, fuller tone.

How to play Mayuri Vina or Taus? 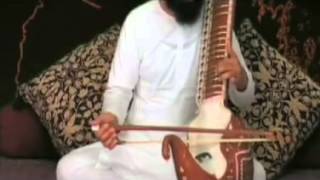 The Dilruba originates from the Taus and some argue is the work of the 10th Sikh Guru, Guru Gobind Singh Ji, whilst that of the Taus was the work of Guru Hargobind Ji (the sixth Guru of the Sikhs). The Dilruba was then produced to replace the previously heavy instrument (the Taus). This attempt was intended to ‘scale down’ the Taus into what is now known to be the Dilruba. This made it more convenient for the Sikh army to carry the instrument on horseback.

The Taus has 28-30 strings. It resembles the Dilruba in the making as well as in playing technique. However, since Ttaus has a bigger sound box so it can produce a much more resonant and mellow sound than what a player can expect from Dilruba.