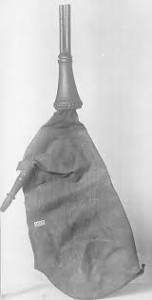 The mashak (also known as mushak baja, masak, mishek, meshek, moshug, moshaq, moshuq, mashak bin, bin baji) is a type of bagpipe found in Northern India and parts of Pakistan and Afghanistan. The pipe was associated with weddings and festive occasions. In India it is historically found in Garhwal in Uttarakhand, Rajasthan and Uttar Pradesh. This bagpipe uses single reeds, and can be played either as a drone or as a melody instrument.
Colonel James Tod (1782–1835 CE) notes in reference to the mashak that the Raja of Jind had a bagpipe band, with the players wearing kilts and pink legging in imitation of Scottish Highland pipers.

How to play Mashak?

Relation with the Scottish Highland pipes

Some academics dispute any indigenous origins of the mashak; researcher Ander Burton Alter wrote in 2000 that the pipes today played in Garwhal are Scottish Highland bagpipes with one bass and two tenor drones, with no local manufacturer or evidence of existence prior to British rule in 1814. Organologist Anthony Baines, however, described an intermediary development stage wherein Indian musicians imitated the Highland pipe by tying “an extra pipe or two” into their mashak. Similarly, the New Grove Dictionary of Musical Instruments (1984) describes the traditional mashak as becoming rare as it is displaced by the Scottish pipes.