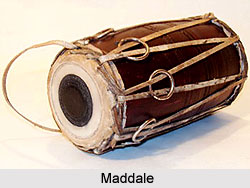 The Maddale (Kannada: ಮದ್ದಲೆ) is a percussion instrument from Karnataka, India. It is the primary rhythmic accompaniment in a Yakshagana ensemble along with Chande. Maddale used in Yakshagana looks similar to mridangam but is markedly different in structure, acoustics, playing techniques and the rhythm system (Yakshagana Tala). Unlike Mrudangam or Tabla, Maddale produces tonic (shruti swara) when played either on rim or on ink. The traditional variety of Maddale was 30 cm long, had 8 inch drum head and produced loud sound. Maddale is available in more than three different variations.

How to play Maddale? 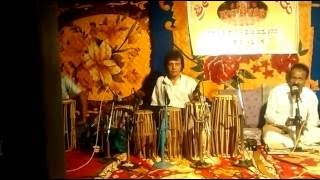 Maddale belongs to mridangam family of drums and hence shares the history of similar drums. Its drum head is similar to tabla and the drum itself is similar to pakhavaj.
Thus it is likely that maddale is a variation of pakhavaj and mrudangam. Over the years, the Maddale evolved to be made of different kinds of wood and for higher octave, and today, its body is constructed from wood of the jackfruit tree among other woods like kakke, baine, hunaalu. Its use has evolved with the development of Yakshagana and Yakshaganic fingering and hand techniques have been developed. Use of palm produces a sound that is somewhat a mixture of pakhawaj and mridangam.

The maddale is a double-sided drum whose body is usually made using a hollowed piece of jackfruit wood about half an inch thick. This body is called Goodu. The two open ends of the drum are covered with a goat skin leather and laced to each other with leather straps around the circumference of drum. These straps stretched to tightly hold the drum heads on either side of the drum body, allowing them to resonate when struck. Drum head on the left is slightly larger (bass side). One side produces bass another treble. The drum head is known as muchchige.

The bass drum head is known as the eda muchchige and the drum head is known as the bala muchchige. The right drum head is similar to tabla drum head but differes slightly creating a major tonal difference. Maddale unlike Mrudangam or Tabla produces tonic when playing on rim and on ink. The left drum head produces lower pitched bass sounds. The right drum head has a circular disk in the center called karne causing the drum to produce harmonic tones. The left drum is smeared with a tuning paste made from ash and rice called bona, before performance to dampen the tone and to produce bass sound.

Maddale is tuned to the tonic of the Yakshagana singer before performance. A wooden peg is sometimes used to tighten the leather straps. Two major strokes are called Gumpu and Chapu. Playing on the rim is called Chapu this is used for tuning. Playing on the ink to produce a more resonating sound is called Gumpu.