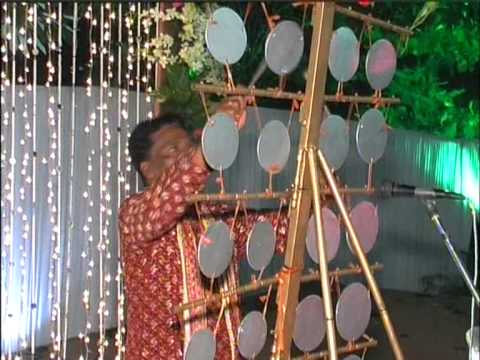 The Loh Tarang is a melodic percussion instrument. It consists of a set of iron circular plates, of different sizes, held in a frame. Each plate is pitched to a note and they are struck with sticks on each hand. ‘Tarang’ literally means waves. Plates sound depends on the different size of plate and hand movement. Theory is based like Jal-Tarang.

A number of ethnic groups in India use folk instruments. Loh Tarang and other Indian instruments are not easily available in musical instrument stores. That’s because they are not used commonly in popular forms of music. Ethnic instruments used in folk tradition are hard to come by. Folk instruments from India have been used by musicians in world music and ethnic fusion. Although Indian classical music is regarded as a higher art form than Indian folk music, there is no denying that classical ragas have been influenced by various forms of folk music. Instruments used in Indian folk music stir the soul. Dwell in the mystical sounds of India.

The first percussion instrument was the stone and stick. Musical stones dates back to 2300 B.C. Notched sticks, rattles, and hollowed log drums were also created during this time. The percussion family includes ancient hourglassed-shaped talking drums, modern metal oil drums, chains jerked in and out of boxes, half coconut shells banged together, washboards, cowbells, wind-bells, thunder sheets, and even brake drums. Just about anything can be turned into a percussion instrument. Today, garbage cans and their lids are being used as percussion instruments.

Tuned percussion instruments consists of the Timpani, Xylophone, Marimba, Glockenspiel, and the Cimbalom. Untuned percussion instruments consists of the Drum (various types), Cymbals, Triangle, Tambourine, Castanets, Chinese Wood Block, and the Tam-Tam. Each individual instrument brings in a certain quality and tone to music. It enhances the total sound of the music and they play a crucial part in music composition and arrangement.