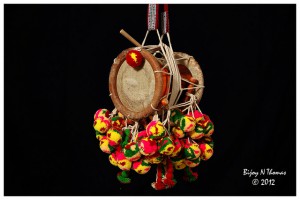 The idakka, also spelt edaykka, is an hourglass-shaped drum from Kerala in south India. This handy percussion instrument is very similar to the pan-Indian damaru.

While the damaru is played by rattling knotted cords against the resonators, the idakka is played with a stick. Like the damaru, the idakka’s pitch may be bent by squeezing the lacing in the middle.

The idakka is slung over the left shoulder and the right side of the instrument is beaten with a stick. The left hand is used for tightening and loosening the tape wound round the middle. Varying the tension of the tape produces variations in tones. Simple melodies extending over one octave can be played in this instrument. The idakka is considered to be Devavadyam and is customarily played standalone during the puja at temples or as the accompaniment to the Sopanam music just outside the sanctum sanctorum, customarily by the Ambalavasi community Marar or Poduval. More popularly, it is one of the five instruments that constitute the panchavadhyam ensemble of Kerala.

Kathakali, the classical dance-drama from Kerala, also gives a slot to playing the idakka when a female character holds the stage. In Koodiyattam too, the Idakka gives good support to the mizhavu. The idakka is an indispensable accompaniment for other dance forms, most notably Mohiniyattam and Krishnanattam. It has become an

Idakka is regarded as a difficult instrument to master, given that the rolls are produced from a single stick (not two unlike in the case of the chenda) and that the practitioner should have a good sense of both rhythm and music. There are many institutions in Kerala where idakka is being taught, the most important among them being Kerala Kalamandalam and Kshetra Kalapeetham in Vaikom.

Of the current lot of Idakka artists, the most famous include Thiruvilvamala Hari, Tripunithura Krishnadas, Chottanikara Subhash Marar, Tichur Mohanan,

Chendamangalam Unni, Kakkayoor Appukuttan, Cherpulassery Krishnakumar Poduval, Payyavur Narayana Marar and Thiruvillwamala Jayan and Njeralath Harigovindan. The one name that is always synonymous with idakka and Sopana sangeetham in the second half of the 20th century has been the legendary Pallavur Appu Marar—he, unlike many others, was an expert in using it both as a percussion and musical instrument.

Idakka is considered as a divine instrument, especially when it is presented at Sopanam, the holy steps leading to the sanctum sanctorum of a temple, during puja sessions. It is performed either solely or accompanied with Sopanam music during the closed-door puja time, thus leaving enough scope for creating a mood of bhakti around.

1. The two faces of idakka are said to represent Sooryan and Chandran .

2. The central stem forms the shareeram.

3. The two strings at the edge are supposed to form the jeevatma and the paramatma.

4. The six holes through which the faces are knotted together stand for six Shastras

5. The four jeevakkols stand for the four Vedas.

Idakka is a kottu vadyam as well as a geeta vadyam . It acts as in former the classification in case of Panchavadyam or Idakka Thayambaka, and as in the latter during Mohiniyattam or fusion sessions. There are very few such instruments in the world with such distinct and diversified application levels. Performers like Thiruvilwamala Hari, Tichur Mohanan and Thiruvilwamala Jayan have specialised in the first aspect, while exponents like Nandakumar and Tripunithura Krishnadas have carved their niche in the second one. Thiruvilwamala Jayan is one among very few artists who performs thayambaka on idakka.

As for the origin of the name of idakka , it is believed that it came from the sound ‘Dakka’. It is well known to people who have an idea of Hinduism that this is the instrument which in tied on the ‘Trishool’ of Lord Shiva. The use of onomatopoeia by Keralites is also well known. Thus the ‘Dakka’ sound transformed into words like ‘Edakka’ and ‘Idakka’.

The Idakka is a developed from the “thudi”, an instrument used by the ancient tribesmen who lived in the forest and that of the “Pootham” artisans.

Kunchan Nambiar, the legendary Malayalam poet, has mentioned about idakka in his “Ghoshayathra”. Idakka finds place in most of the literary works that has close links with the Dravidian culture.

Even though this may be the case Idakka is still used and popularised as an instrument of and for the gods and goddess. Idakka was not seen or used, even in the court of Travancore king Swati Tirunal, a connoisseur and patron of music. It was not seen to be used by revered Carnatic music composer Saint Thyagaraja, when he was visited by classical musician, Shadkala Govinda Marar. This clearly shows that the Idakka before being used on a stage along with the accompaniment of other instruments, was confined strictly to the cultural and customary rites and rituals.

It is also believed that once when Lord Shiva and Parvathi stopped their dance, the Dakka tied onto the Trishul of Lord Shiva produced 14 different sounds. According to Patanjali, it is these sounds which later became vowels and consonants of our language.

This is what Pāṇini has stated in this sloka. The 14 different sounds produced are as follows:

Hence, it is no wonder that idakka was given a pivotal position in the Trishul of Lord Shiva. Lord Shiva is also interpreted to be the lord of the aboriginals. And thus it is quite clear that Idakkya has a profound relationship with the gods.

In the musical gems of Lord Vishnu there is a mention about 3 types of instruments – Huduka, Dakka and Madhidkkya, which are similar to each other in structure. It is assumed and some insights reveal that the Idakka is developed from Mandidakkya.

Once this instrument, which belonged to Lord Vishnu, was stolen by the disciples of Lord Shiva and was used during the dance performance of Lord Shiva. When Lord Shiva came to know abouth this theft, he ordered to return it back to Lord Vishnu. But when the Bhootaganas approached Lord Vishnu, he turned down their apologies and cursed them by saying “if you keep this instrument on the ground, that place will be destroyed”. This is another version of the story regarding idakka that still find place among the traditional instrumentalists.

Kuttyi, the core of the tree yielding superior Jackfruit or its roots, Black wood, catechu, the Indian laburnum, red sandal wood etc. are the trees used for making the kuttyi of Idakka . Trees that do not sleep at night and have grown on the banks of a constantly flowing river are the most preferred. The Kuttyi is a comparatively wide hollow stick with a length of 8–8½ inches and a diameter of 4-4 ? inches. After making the wood hollow, the end or face of the Kuttyi will be ? inch wide. Even though both the ends of the Kuttyi are of the same width, the center part of the stick will be comparatively thin. Exactly at the center of the stick, there is a hole, which is known as the air hole. This hole, which is two millimeter in diameter, is known as the navel of the Kuttyi. It is believed that, when the end part or the face of Kuttyi made in this manner is brought close to the ear, we can hear the ‘Om’ reverberations. It is through the navel of the kuttyi that the air produced because of the pressure while the idakka is played passes out. Two reeds of Palmyra are tied onto the small nails on both the end and sides of the ‘Kuttyi’. It is these reeds that produce the vibration when Idakka is played. In order to get a grip on the stick, a cloth or ‘edakacha’ is wound around the Kuttyi.

Valayangal, two rings each of 1-inch thickness are made from the plank of wood of a mango tree or a jackfruit tree. Each ring will have a diameter of about 8-8 ? inches. Six holes are made in these rings for tying the strings. Once the holes are made the skin should be stuck on the rings in such a manner that it covers and reaches out of the circumference of the rings. This skin, which is known as ‘ulloori’ or ‘chavvu’, is made from the outer wall of the cow’s intestine. This thin layer of skin in cleaned and purified by members of a community named ‘chakliar’ This skin is stuck onto the rings with a paste made from a special kind of boiled rice mixed with ash obtained by burning dried cow dung. It is the boiled rice that we get from the temple after the ceremonial offering to gods and goddess which is used for the purpose.

Even though ‘Idakka’ has two sides or face, only one face is used to play. The face that we use to play is known as the ‘kottuvattam’ and the other in the ‘mootuvattam’ (backside). In order to understand the face that is used to play, a ‘poduppu’ or a colorful woolen ball is tied onto the end.

Jeevakkolukal, four perfectly rounded sticks, which are 7 inches long and 1 inch in diameter. Several types of light wood are used for making these.

Idakka is the only traditional Kerala musical instrument which permits easy and convenient assembling and dissembling of its components. An assembled idakka is usually hung on the wall. In some temples it is being outside the door of the inner sanctum sanctorum, which add to its beauty. It is now commonly used for ornamentation in the houses not only by Keralites but also by foreigners. Ananda Sivaraman, the son of Late Njeralathu Rama Pothuval and the only person who have mastered the artisanship of making an Idakka in Kerala, also shares this opinion.

The main peculiarity in learning most of the traditional musical instruments of Kerala like the chenda and idakka is that the beginners will not be taught the instrument using that particular instrument. Instead they will have to master the art of playing it by practising on a similar shaped object made of wood or stone.

The beginners of idakka are usually given a block of wood called “Kayyatha” or a block of wood which suits the hand and a stick made from tamarind tree. They have to stand while practising and are made to practice different rhythmic oral tunes like “Thakuku”, “Themkuku”, “Thathakuku”, “Them Them kuku”, “Thakida Thakida”, “Thathakida” at different speeds. The rest of the tunes must be formulated with ones own imagination.

People who have mastered the chenda will be able to play Idakka with a little bit of practice.