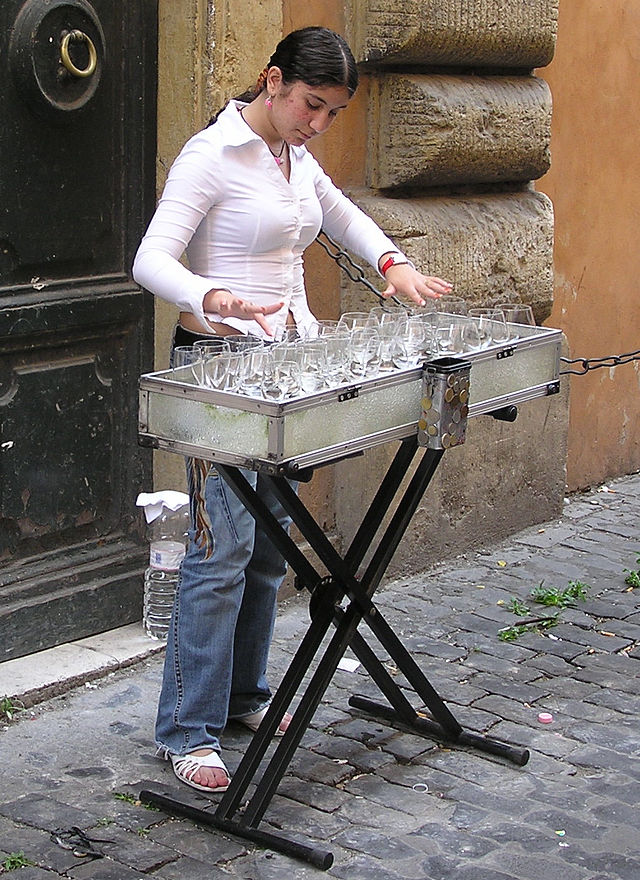 It is played by running moistened or chalked fingers around the rim of the glasses. Each glass is tuned to a different pitch, either by grinding each goblet to the specified pitch, in which case the tuning is permanent, or by filling the glass with water until the desired pitch is achieved.

Historyp was created in 1741 by Irishman Richard Pockrich, who is known as the first virtuoso of the musical glasses.

The composer Christoph Willibald Gluck played the musical glasses. He performed in London and Copenhagen. His instrument consisted of 26 goblets.

The instrument was popular in the 18th century. Pockrich’s contemporary, Ford, published Instructions for the Playing of the Musical Glasses while Bartl published a German version.

Contemporary uses
On February 18, 1979, Gloria Parker performed as a musical glasses soloist with the Hartford Symphony Orchestra at the Jai Alai Fronton in Hartford, Connecticut, USA. Richard Hayman, noted for his arrangements for Boston Pops conductor Arthur Fiedler, was the guest conductor for the 90-piece orchestra that accompanied the musical glasses which included songs such as Lara’s Theme from the movie Dr. Zhivago, Lover and Amor.

There are several current musicians who professionally play the glass harp. Among them are the Glass Duo from Poland, Philipp Marguerre and Clemens Hofinger in Germany, France’s Jean Chatillion and Thomas Bloch, Brien Engel, and Dennis James in the United States and Canada’s Real Berthiaume. Glasses have been also used by famous rock band Pink Floyd during the recording of “Shine On You Crazy Diamond” on their Wish You Were Here album, recorded and released in 1975. Igor Sklyarov played the glass harp on the same song during two 2006 concerts recorded in Venice, Italy by former guitarist David Gilmour. Gilmour also used the effect during his August 26, 2006 concert in Gdańsk, Poland, with the help of Guy Pratt, Phil Manzanera and Dick Parry. Both recordings are available on Gilmour’s Live in Gdańsk CD, although the Venice recording is only available on the 5-disc version of the album or as an internet download with the 3- and 4-disc versions.

A Toast To Christmas with the Singing Glasses is an album recorded and released in 1980, composed and performed by Gloria Parker. Fourteen well-known carols are performed with the glass harp producing flute-like sounds on crystal glasses, marking the first commercial album to use glasses as a musical instrument.[citation needed]