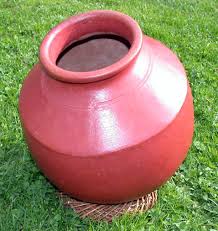 The Ghatam is a percussion instrument used in the Carnatic music of South India. Its variant is played in Punjab and is known as gharha as is a part of Punjabi folk traditions. Its analogue in Rajasthan is known as the madga and pani mataqa.

The ghatam is one of the most ancient percussion instruments of South India. It is a clay pot with narrow mouth. From the mouth, it slants outwards to form a ridge. Made mainly of clay backed with brass or copper filings with a small amount of iron filings, the size of the ghatam varies according to its pitch. The pitch can be slightly altered by the application of plasticize clay or water.

Although the ghatam is the same shape as an ordinary Indian domestic clay pot, it is made specifically to be played as an instrument. The tone of the pot must be good and the walls should be of even thickness to produce an even tone.

Ghatams are mostly manufactured in Manamadurai, a place near Madurai in Tamil Nadu. Though this instrument is manufactured in other places like Chennai and Bangalore, too, Manamadurai ghatams have special tonal quality. It is believed that the mud is of special quality. The Manamadurai ghaṭam is a heavy, thick pot with tiny shards of brass mixed into the clay. This type of ghaṭam is harder to play but produces a sharp metallic ringing sound which is favored by some players.

The pot is usually placed on the lap of the performer, with the mouth facing the belly. The performer uses the fingers, thumbs, palms, and heels of the hands to strike its outer surface to produce different sounds. Different tones can be produced by hitting areas of the pot with different parts of the hands. Sometimes the ghatam is turned around so that the mouth faces the audience and the performer plays on the neck of the instrument. The ghatam can be moved to other positions while being played.

Occasionally, the performer will, to the amusement of the audience, toss the instrument up in the air and catch it. The ghatam is ideal for playing rhythmic patterns in very fast tempo.

The ghatam usually accompanies a mridangam.

The word ghata in Sanskrit means “pot”. Variations of this term are used in modern Indian languages.

The madga is a north Indian version of the south Indian ghatam and is made from a very special clay. The maker sometimes adds some kind of metal or graphite dust to the clay which is responsible for the blue/gray looking and for the special sound.

The madga can be played similarly to the ghatam. The extreme bass volume can be produced if one hits with the flat hand the opening at the top of the instrument. The madga can be played with mallets and there are many sounds which can be produced with this instrument. It is thinner than a ghatam but very stable and not as fragile as one might think.

This clay pot in Gujarat known as matka features an almost perfectly round shape (tuned to C#) and is made in many villages in and around Jaipur (Rajasthan) and Gujarat. The matka is used to store water and sometimes yogurt (curd) and can be used as a cooking vessel. When used as a musical instrument in folk music, it is known as ghata and is played in a similar manner as the South Indian ghatam but the technique and rhythmic style is not as refined as that of Carnatic ghatam. Another difference is that the ghara is often traditionally played with metal rings on the thumbs, index, middle, and ring fingers of both hands (but players vary on how many rings and fingers are used). There are a few versions of this instrument. Some are made from a black clay that typically comes from a single area in Rajasthan while many others in Rajasthan and Gujarat are made from a reddish clay. A third version of the ghaṛa is made from reddish clay but features a much flatter, squat shape. Both of the red clay types can also be found highly decorated with colorfully painted designs while the black ones are usually plain and unfinished. The black ghaṛas are extremely light but very dense and have a huge sound. The shell tones ring in a bell-like fashion with much more of a sustain than the various South Indian ghaṭams (although the Mysore ghatam comes close). The bass tones of this instrument are very prominent. Since these instruments are fired at a much higher temperature for a longer time than South Indian ghatams, there is more consistency between instruments in terms of Western pitch. In other words, there is much less variation in the tuning when compared with ghatams from South India, which can range from a low B up to a high A chromatically. Ghaṛas or matkas are usually found with a range from approximately C or C# to D (or slightly higher) although there does not seem to be any indication that these instruments are constructed with tuning considerations. Other spellings for matka include mutkay and madga.