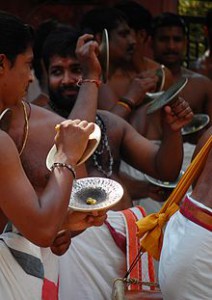 Elathalam, or Ilathalam, is a metallic musical instrument which resembles a miniature pair of cymbals. This instrument from Kerala in southern India is completely made out of bronze and has two pieces in it.

Elathalam is played by keeping one part of the cymbal in left hand hand banging the other cymbal to the one in left hand. Even though this instrument is small by size, it does have more thickness than the common cymbal, and thus gives a distinct chime.

Elathalam is never a lead instrument but is used in a number of ethnic Kerala percussion ensembles like Panchavadyam, Chenda melam and Thayambaka besides by second singer on a Kathakali stage besides providing the beat in Kuzhal Pattu and Kombu Pattu.