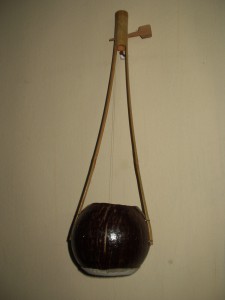 In origin the ektara was a regular string instrument of wandering bards and minstrels from India and is plucked with one finger. The ektara is a drone lute consisting of a gourd resonator covered with skin, through which a bamboo neck is inserted

How to play Ektara? 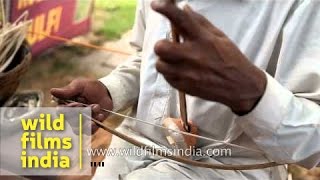 The ektārā player holds his instrument upright, gripping the neck just above the resonator and plucking the playing string or strings with the index finger of the same hand. If he is dancing, he supports the gourd resonator with his other hand, in which he carries clusters of small bells which sound as he beats his hand against the gourd.Pressing the two halves of the neck together loosens the string, thus lowering its pitch. The modulation of the tone with each slight flexing of the neck gives the ektara its distinctive sound. There are no markings or measurements to indicate what pressure will produce what note, so the pressure is adjusted by ear.The various sizes of ektara are soprano, tenor, and bass. The bass ektara, sometimes called a dotara often has two strings (as literally implied by do, “two”).

The ektara is a common instrument in Baul music from Bengal. Some controversy has arisen in recent years over the adoption and alleged corruption of Baul music by popular bands and films in Bengal. It has become common to mix traditional instruments like the ektara with more modern sounds in an attempt to appeal to a wide audience, which traditional musicians feel is “destroying the true beauty” of Baul music.

Parvathy Baul at Ruhaniyat mystic music festival, at Purana Qila, Delhi
These instruments are commonly used in kirtan chanting, which is a Hindu devotional practice of singing the divine names and mantras in an ecstatic call and response format. The Ektara is used by Sadhus, or wandering holy men and for Sufi chanting as well as by the Bauls of Bengal.