The dotara (or dotar) (Bengali: দোতারা) is a two or four or some times five stringed musical instrument resembling more to mandolin than a guitar. It is commonly used in Assam, Bangladesh, West Bengal & Bihar, and dates from the 15th-16th century when it was adopted by the ascetic cults of Bauls and Fakirs. 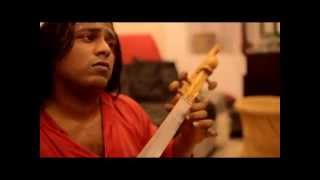 The dotara is the singlemost important folk instrument used in various genres of folk music throughout the land of Bengal. It has two main forms, the bangla and the bhawaiya. The bangla form originated in the Rahr Bangla region, where it is still predominantly played. It has metal strings, which give it a brighter tone than other instruments played in the area. Although a dotara can have 4-5 string, but every song you can play with the help of two main string ( other string are used to give more variation). That is why its name is dotara (do = two, tar = string).

The bhawaiya form is almost extinct in contemporary times and has a more primeval beginning[clarification needed] than its bangla cousin. Again the strings are its striking feature, being either made of thick cotton, silk or more popularly of catgut, giving it a more bass timbre. This instrument is widely used in eastern folk music forms such as the Bhhawaiya – of which the Goalpariya is a relatively well known subcategory – the Mahishali, and the Baul forms prevailing in and around the Bengal Province (which makes this instrument transregional, as this includes areas in Assam and East Bihar).

The dotara is a stringed, pluck instrument, played in an open note combination, widely accompanying the beat and rhythm structure of folk percussions such as Dhhol, Khhol or Mandira. It is made out of neem or other species of hardwood, with an elongated, roundish belly for a sound box, tapering to a narrowish neck culminating in a peg box which is elaborately carved in the shape of peacock-head, swan-head or other animal motif. The narrow neck serves as the finger-board (albeit without frets)—this is made of brass or steel (as in a sarod) and particularly lends the liquid form to the tonal quality (as opposed to the discrete quality of a fretted instruments). The sound box of the instrument is covered with a tightly stretched kidskin or lizard-skin, as in a rabaab or a sarod. In fact, the dotara is a simpler version of sarod.

The name of the instrument itself suggests two-strings: do is ‘two’ and tar is ‘string’—which suffices both as an octave for a complete set of notes in a scale as well as the bass and treble of the percussion (the low strung string serving as bass and the higher one as treble). However, the contemporary instrument can have as many as four strings or more (which gives a little more than two and a half octaves) and increases the versatility of the instrument in terms of both music and rhythm. With four strings, the tuning structure is as follows (from top to bottom)—Soh(lower)-Do-Do-Fah. The Indian notation would read as: Pa – Sa – Sa – Ma with Do/Sa being the dominant/root note of the song.