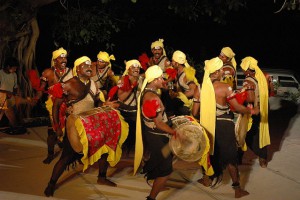 The dollu is a percussion instrument originating from Karnataka,India. It is classified as a membranophone, and the head is made of either sheep or goat skin and is fit tightly to a frame made of honne or mango tree wood. The instrument is large and heavy, and when struck, makes a thunderous sound.

A story traces the origin of the Dollu to the divine couple Shiva and Parvathi. To pass time, Shiva and Parvathi played games and laid a bet. Whichever one of them lost the bet was to leave Kailasa to live anonymously on Bhuloka(Earth). Shiva lost the bet and moved into a cave, taking the form of a stone. Mayamurthi, Shiva’s ardent loyalist, guarded the cave. Over time Parvathi became fed up of managing the universe and decided to send Vayu in search of Shiva, but it was in vain. Narada located the cave, killed Mayamurthi and forced ‘Shiva’ to return to Kailasa. Shiva, unwilling to leave behind the dead body of his trusted and beloved guard, made a Dollu out of the dead body and carried it to Kailasa. For the reasons of its origins, the Dollu is a popular instrument among Shaivites.