The esraj (Bengali: এস্রাজ; Hindi: इसराज; English /ˈɛsrʌdʒ/; also called the Indian harp) is a string instrument found in two forms throughout the north, central, and east regions of India. It is a young instrument by Indian terms, being only about 200 years old. The dilruba is found in the north, where it is used in religious music and light classical songs in the urban areas. Its name is translated as “robber of the heart.” The esraj is found in the east and central areas, particularly Bengal (Bangladesh and Indian states of West Bengal and Tripura) and it is used in a somewhat wider variety of musical styles than is the dilruba. Originally an Afghan Instrument it first appeared in the region during the Pashtun rule of Northern India.

The Dilruba originates from the Taus and some argue is the work of the 10th Sikh Guru, Guru Gobind Singh, whilst that of the Taus was the work of Guru Hargobind (the sixth guru of the Sikhs). The Dilruba was then produced to replace the previously heavy instrument (the Taus). This attempt was intended to ‘scale down’ the Taus into what is now known to be the Dilruba. This made it more convenient for the Sikh army to carry the instrument on horseback.

How to play Dilruba? 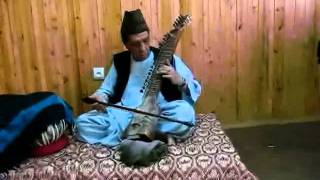 How to play Dilruba? 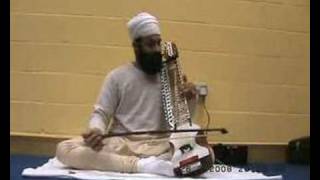 The structure of both instruments is very similar, each having a medium sized sitar-like neck with 20 heavy metal frets. This neck holds on a long wooden rack of 12-15 sympathetic strings. While the dilruba has more sympathetic strings and a differently shaped body than the esraj, they both have four main strings which are bowed. All strings are metal. The soundboard is a stretched piece of goatskin similar to what is found on a sarangi. Sometimes the instrument has a gourd affixed to the top for balance or for tone enhancement.

The instrument can be rested between the knees while the player kneels, or more commonly rested on the knee of the player while sitting, or also on the floor just in front of the player, with the neck leaning on the left shoulder. It is played with a bow (known as a “gaz”), with the other hand moving along the strings above the frets. The player may slide the note up or down to achieve the portamento, or meend, characteristic of Indian music.

Both the dilruba and the esraj had been declining in popularity for many decades. By the 1980s the instrument was nearly extinct. However with the rising influence of the “Gurmat Sangeet” movement, these instruments are once again attracting considerable attention.

1. A. R. Rahman is known as one of the composers in India who has used the Dilruba, in works like “Dil Se” and “Vande Mataram”. Possibly the most famous exponent of the esraj has been Pandit Ranadhir Ray, who died in 1988.Kalipada Ghoshal(1906-1995). Ranadhir Ray was a student of Ashesh Bandopadhyay, and was on the faculty at the Music department of Visva-Bharati University in Santiniketan. Today, the best known exponent is Buddhadeb Das, also from Santiniketan. One of his leading student is Dattatreya Ghosh,reading in Nava Nalanda High School of there. The esraj was the favourite instrument of the spiritual Master Sri Chinmoy who used it as a meditation tool and outlet for emotion, not necessarily to create or reproduce traditional music from the region.

2. In South India, the most famous exponent in the film industry to play Dilruba was Dilruba Shanmugham. A great dilruba player, he has been conferred with the Kalaimamani award by the Tamil Nadu Government. He has played innumerous scores on Dilruba for legends like MSV and Ilayaraja.

3. Ravi Shankar (known then as Rabindra) played the Dilruba in the 1930s, as a member of the dance group of his older brother Uday Shankar.

4. Indian physicist and mathematician S. N. Bose is also known to play it.