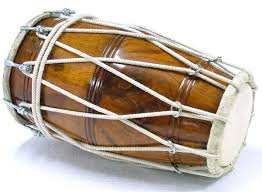 The dholak (Punjabi: ਢੋਲਕ, Bengali: ঢোলক, Hindi: ढोलक; Dutch: dhool in the Netherlands and Suriname) is a South Asian two-headed hand-drum. It may have traditional cotton rope lacing, screw-turnbuckle tensioning or both combined: in the first case steel rings are used for tuning or pegs a twisted inside the laces. The dholak is mainly a folk instrument, lacking the exact tuning and playing techniques of the tabla or the pakhawaj. The drum is pitched, depending on size, with an interval of perhaps a perfect fourth or perfect fifth between the two heads. It is related to the larger Punjabi dhol and the smaller dholki. The smaller face of dholak is made up of she goat skin for sharp note and bigger face is made up of skin of he goat,buffalofor low pitch which makes dholak a great variation of bass and treble with rythmic high and low pitch .

How to play Dholak? 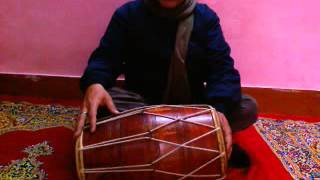 How to make Dholak?

It is widely used in qawwali, kirtan, lavani and bhangra. It was formerly used in classical dance. Indian children sing and dance to it during pre-wedding festivities. It is often used in Filmi Sangeet – Indian film music – in chutney music, baithak gana, tan singing and the local Indian music of Jamaica, Suriname, Guyana, Trinidad and Tobago, where it was brought by indentured immigrants. In the Fiji Islands the dholak is widely used for bhajan and kirtan. Also it is mostly used in India.

The dholak’s higher-pitched head is a simple membrane while the bass head, played usually with the left hand, has a compound syahi to lower the pitch and enable the typical Dholak sliding sound (“giss” or “gissa”), often the caked residue of mustard oil pressing, to which some sand and oil or tar may be added. The Sri Lankan version uses a large fixed tabla-style syahi on the middle of bass skin.

In Pakistan, it us used during weddings by family members to sing folk and wedding songs at events known as Dholkis. Playing style
The drum is either played on the player’s lap or, while standing, slung from the shoulder or waist or pressed down with one knee while sitting on the floor. The shell is sometimes made from sheesham wood (Dalbergia sissoo) but cheaper dholaks may be made from any wood (mango, for example). Sri Lankan dholaks and dholkis are made from hollowed coconut palm stems.

In some styles of playing (i.e. Punjab) an iron thumb ring is used to produced a distinctive “chak” rim sound. In other styles (e.g. Rajasthani), all fingers are generally used.

Dholak masters are often adept at singing or chanting and often provide a primary entertainment or lead drumming for a dance troupe. Perhaps the
most characteristic rhythm played on the “dhol” is a quick double-dotted figure that may be counted in rhythmic solfege as “ONE -tah and -tah TWO -tah and -tah

THREE-E -TAH, FOUR AND” (rest on ‘and’) or simply a long string of double-dotted notes, over which the bass side is used for improvisation.

On large dholaks, known as dhols, the high-pitched head may be played using a thin (1/4″/6 mm or less) long (over 14″/30 cm) stick of rattan or bamboo (rattan is preferred for its flexibility) and the low-pitched drum head using a somewhat thicker, angled stick.

The dholki (Hindi/Urdu: pipe or tube) is often a bit narrower in diameter and uses tabla-style syahi masala on its treble skin. This instrument is also known as the naal

Steel tuning rings are not used – instead wooden pegs are twisted to create a very high tension. The heads are created with triple stitching to withstand tension.