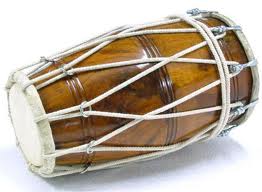 Dhol (Devanagari:ढोल, Khowar: دھول, Bengali: ঢোল, Gurmukhi:ਢੋਲ, Urdu: ڈھول, Assamese: ঢোল) can refer to any one of a number of similar types of double-headed drum widely used, with regional variations, throughout the Indian subcontinent. Its range of distribution in India, Bangladesh and Pakistan primarily includes northern areas such as the Assam Valley, Gujarat, Kashmir, Maharashtra, Konkan and Goa, Punjab, Haryana, Karnataka, Rajasthan, Sindh and Uttar Pradesh. The range stretches westward as far as eastern Afghanistan. The Punjabi dhol is perhaps best known abroad due to its prominent place in the rhythm of popular Punjabi bhangra music.

Someone who plays the dhol is known as dholi (Punjabi: ਢੋਲੀ) or dhuliya (Assamese: ঢুলীয়া). special expression of face and frequent rotation of whole body is associated with a particular dholi to perform a realistic performance. One is seen more energetic during the performance which makes listener to feel dramatic as well as exotic.

The dhol is a double-sided barrel drum played mostly as an accompanying instrument in regional music forms. In qawwali music, the term dhol is used to describe a similar, but smaller drum used with the smaller tabla, as a replacement for the left hand tabla drum. The typical sizes of the drum vary slightly from region to region. In Punjab, the dhol remains large and bulky to produce the preferred loud bass. In other regions, dhols can be found in varying shapes and sizes and made with different woods and materials (fiberglass, steel, plastic). The drum consists of a wooden barrel with animal hide or synthetic skin stretched over its open ends, covering them completely. These skins can be stretched or loosened with a tightening mechanism made up of either interwoven ropes, or nuts and bolts. Tightening or loosening the skins subtly alters the pitch of the drum sound. The stretched skin on one of the ends is thicker and produces a deep, low frequency (higher bass) sound and the other thinner one produces a higher frequency sound. Dhols with synthetic, or plastic, treble skins are common.

The dhol is slung over the neck of the player with a strap usually made up of woven cotton. The surface of the wooden barrel is in some cases decorated with engraved patterns and sometimes paint.

In the pre-Partition era, dozens of rhythms were played on the Punjabi dhol, which corresponded to specific functions. However, with the decline or disappearance of some cultural practices, recent generations of dhol-players have become unfamiliar with many of these. At the same time, the growth of folkloric staged bhangra dance in Indian Punjab inspired the creation of many new rhythms particular to that dance.

Some of the most common Punjabi dhol rhythms are bhangra (originating with the old, community bhangra dance), dhamaal (associated with many cultural functions, including worship at Sufi shrines), and kaharva, a dance and song rhythm. The staged “bhangra” dance, originating in the 1950s, gave special prominence to kaharva, for the performance of actions called luddi. In the 1970s, many more actions were added to staged bhangra to go with the kaharva rhythm, which started to become one of the most prominent rhythms associated with the dance. At the same time, this type of rhythm would be played on the dholki drum to accompany Punjabi songs. So when, in the 1990s, Punjabi pop songs began to evoke bhangra dance, they used the kaharva rhythm. It is known now by various names. Some dhol-players call it kaharva, its technical name, while other players in Punjab call it luddi to refer to the dance of that name. With the style of dhol-playing that developed in the U.K., the name chaal was adopted—probably in reference to the “chaal” movements it accompanies in modern bhangra—however, that term is not used elsewhere.

The introduction of electronic devices such as tape recorders has led to a decline in the importance of dhol players in celebratory events. Nevertheless, dhol music still figures in the studio recordings of present day raas, garba and bhangra music artists. A related instrument is the dholak or dholki.

The dhol is a drum that dates back to the 15th century. It was probably introduced to the Indian subcontinent via the Persian drum type dohol (duhul). Evidence for this is found in Ain-i-Akbari, which describes the use of duhul in the orchestra of the Mughal emperor Akbar the Great. The Indo-Aryan word “dhol” appears in print around 1800 in the treatise Sangitasara.

Relation to other drums

A similar but distinct family of drums with similar names appears in Iran (Persian: دهل‎), Armenia (Armenian: դհոլ), and states of Central Asia like Afghanistan.

In Western Punjab, the beats of dhol have been an element in the ceremonies of the great Sufi mystics and their followers. The patterns of dhol have been developed to catalyze the mind of the devotee who is seeking spiritual trance. Traditionally the Punjabi dhol has been the domain of men.

In Assam, dhol is widely used in Rongali Bihu (Bohag Bihu), the most beloved festival of the Assamese people. Rongali Bihu is celebrated in the mid of April every year. Usually on 14 or 13 April according to Assamese traditional calendar

Assamese people consider dhol to be a devo badyo (Assamese: দেৱ বাদ্য) or instrument of god, and that it was brought to Earth by the Pandavas.

The dhol was used by Gujaratis during celebrations such as Navaratri to accompany garba. Garba are the folk songs which describe the grace of the divine mother.It is one of the important musical instruments in Goa.

In Maharashtra, dhol is a primary instrument used in Ganesh Festivals. In the city of Pune locals come together to form dhol pathaks or troups. Pune supposedly has the largest number dhols in India. In the city of Nagpur, famous troups such as Babulgao, play dhol in festivals and other occasions. Here dhol is referred to as ‘Sandhal’. Dhol is made up of two stretched membranes tied by strong string. One side of dhol is played by wooden stick called as “TIPARU”, on that side black coloured ink paste stick in the centre. This membrane is called the “Dhum”. In technical language it is called as base. Another side of dhol is called “Thapi” or “chati”. In technical language it is called as tremer, this side of membrane is only played by palm. boll of the dhol is “Dhin” & “Taa”. “Dhin” for the “Dhum” side and “Taa” for the “Thapi” side

Called as dhollu in Kannada, is accompanies a folk dance form known as dollu kunitha and is performed by the people of the Kuruba caste of Karnataka.

The dhol is the main musical instrument in the Pashtun (or “Pathan”) dance known as attan. The Afghan and Iranian Dhol is not the same drum like in the Indian subcontinent

It has also become popular in other parts of the world due to South Asian diaspora. Dhol has been a popular musical instrument in both formal and informal dance performances for decades. In Singapore, Bhangra is such a colourful and sought after performance for Indian wedding and functions. A very well known and renowned Bhangra Dhol Player, Mr Sharanpal Singh Gill.