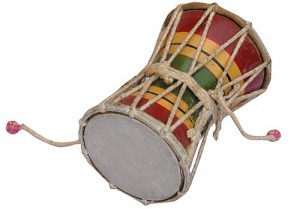 A damaru (Skt.damaru; Tibetan ཌཱ་མ་རུ; Devanagari: डमरु) or damru is a small two-headed drum, used in Hinduism and Tibetan Buddhism.Damru is known as the instrument of Lord Shiva. Damru was first created by Shiva to produce spiritual sounds by which this whole universe has been created and regulated.

How to play Damaru? 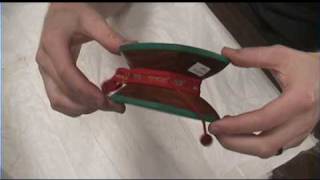 The drum is typically made of wood, with leather drum heads at both ends; the damaru might also be made entirely out of human skulls. The resonator is made of brass.The height of the damru is 6 inches and weight varies from 250-330 gm. Its height ranges from a few inches to a little over one foot. It is played single handedly.

The strikers are typically beads fastened to the ends of leather cords around the waist of the damaru. Knots in the leather can also be used as strikers, also crochet material is common. As the player waves the drum using a twisting wrist motion, the strikers beat on the drumhead.

The damaru is very common throughout the Indian subcontinent. The damaru is known as a power drum, and when played, it is believed to generate spiritual energy. It is associated with the Hindu deity Shiva. It is believed that Sanskrit language was recognized by the drumbeats of the damaru (see Shiva Sutra for the sounds), and His performance of the cosmic dance of tandava. The damaru is used by itinerant musicians of all stripes, due to its small portable size.

In the shield shape of some damarus, the triangular upward representation also symbolizes male procreativity (the Lingam), and the downward round representation symbolizes the female procreativity (the Yoni). Symbolically, the creation of the world begins when the lingam and yoni meet at the midpoint of the damaru, and the destruction takes place when they separate from each other.

In the Tibetan Buddhist tradition, the damaru is part of a collection of sacred implements and musical instrument was adopted from the tantric practices of ancient India.

These reached the Land of Snows from the 8th to 12th century, persisting in Tibet as the practice of Vajrayana flourished there, even as it vanished in the subcontinent of India.

The skull (thöpa) damaru is made from a male and female skull bone or calvarium, cut well above the area of the ear, and joined at their apex. Inside, male and female mantras are appropriately inscribed in gold. The skins are traditionally cured by burying them with copper and other mineral salts, and special herbal formulas for about two weeks. These are then stretched and applied to the two sides, giving the skins their familiar blue or green mottled appearance. A collar of simple brocade, or copper or silver, has a hand-hold, and is the site of attachment of the beaters, whose knit cover represents two eyeballs. The skulls are also carefully chosen for their attributes and source. After the Tibetan diaspora in 1960, they began to be manufactured in India and Nepal, with a continued degradation of quality. Today, India is no longer a source, and their creation and export from Nepal are banned, because of the acquiring of human bone through illegal practices. One still does find occasionally those with painted skins and without the proper mantras or other characteristics.

The symbolism and energetic properties of the drums is extensive. These human skull damaru or chang te’u are used in a wide range of Vajrayana ritual, as a standard right hand accompaniment to the bell, held in the left hand. Usually used to together as an accent or punctuation during various tantric practices, the drum can also keep time during entire passages. For the solo practitioner, it is an essential tool, while in larger assemblies, only the presiding Rinpoches and chant master (Umdze) use them, in concert with the long horns (radung), short horns (jalung), large cymbols (silnyne and rolmo) and large temple drums (nga).

The practice of Chod (pronounced Chö), is a uniquely Tibetan development, that arose in the 10th century from the revelations of the most famous female saint of Tibet,

Machik Labdron. This spiritual practice spread widely, and became popular in all lineages of Tibetan Buddhism, except the Sakya. Today it has translated to Western Buddhist practices and there even exists a school in the West, solely devoted to this spiritual technique. The practice encompasses the full spectrum of Vajrayana philosophy and principles. However, it focuses on the dual pillars of Skillful means (deep compassion for the suffering of others) and Wisdom (understanding the true spiritual nature of oneself and all phenomena).

With no known antecedent, the Chod drum is traditionally made of acacia wood (seng deng), though a variety of beautiful woods are acceptable, as long as the tree is not toxic and does not possess thorns or other negative attributes. Made as a one-piece, double-sided (two-headed) bell shape, size varies from 8″ to 10″ in diameter.

Usually with only a thin verneer of varnish, so that the grain of the wood shows, they come the common red (marpo), black (nakpo) or rare yellow (serpo) type of acacia, and are very occasionally painted with skulls, the eight charnel grounds, or other symbols. The waist or belt is traditionally made of leather, though often brocades are used. There are various configurations of gold mantras written inside each drum interior, and skins are of the variety mentioned above, and called “trin-pak” or cloud skins. The damaru is completed by a long sash or tail, which requires small jingle bells or yerka to be attached, as well as a metal mirror (melong), strips of predatory animals, and human hair. There are other elements of their production which also remain a guarded secret of the few craftsmen who retain this art.

Again, the symbolism and meaning of the various parts is extensive, and thus all these elements crucial to their ultimate purpose and function.

The pitch of the drum varies, and the tone may vary depending on conditions of dampness, temperature and so on. Played slowly, and methodically, the droning of the damaru accompanies the haunting melodies and chants of the Chod ritual, as of which are accompaniments for the inner meditations and visualizations that are at the heart of this spiritual practice.

The above applies to the ideal manufacture of the damaru, and as still described in the definitive modern work, the “Mindroling Handbook of Vajrayana Implements.”

Those manufactured in India and Nepal are made of indeterminate and cheap woods, with painted skins, often no interior mantras, and altogether deviating from the many other essentials, as presrcibed in technical literature such as the Mindroling Handbook. Such copies are now widespread and in use by Eastern monastics and Western students. Fortunately these are now available again, through one or two sources of manufacture in Bhutan, where Vajrayana has remained the state religion
during the whole period of the Chinese occupation of Tibet. With new generations of devoted and trained Western practitioners, the future of the practice of Chod and of properly made damaru looks bright. It may yet fulfil the promise of the symbolism of the drum itself: The proclamation of Dharma and the sound of compassion reverberating through limitless space.