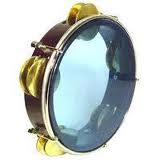 Daf is a large Persian frame drum used in popular and classical music. The frame is usually made of hardwood with many metal ringlets attached, and the membrane is usually goatskin. Daf is mostly used in the Middle East, Kurdistan, Iran, Armenia, Pakistan, Turkey,  Tajikistan and Azerbaijan, and usually accompanies singers and players of the tambura, violin, oud, saz and other Middle Eastern instruments. Some dafs are equipped with small cymbals, making them analogous to a large tambourine.

The earliest evidence of the daf dates back to Sassanid Iran. The  Pahlavi (an ancient Iranian language) name of the daf is dap. The word daf is therefore the Arabicized form of the word dap. Some pictures of dap have been found in paintings that date before the Common Era. The presence of Iranian dap in the reliefs of Behistun suggests the daf existed before the rise of Islam. Dafs were part of religious music in Iran much before Sufism. Iranian music has always been a spiritual tool. It shows that dafs played an important role in Mazdean Iran emerging as an important element during the Sassanian times during the Kâvusakân dynasty. Also there is a kind of square frame drum in the stonecutting of Taq-e Bostan
(another famous monument located 5 km (3 mi) northeast of Kermanshah city). These frame drums were played in the ancient Middle East (chiefly by women in Kurdish societies), Greece, and Rome and reached medieval Europe through Islamic culture.

Norouz (the first day of the Iranian New Year and the national festival of the Iranian peoples) and other festive occasions have been accompanied by dap in Sassanid periods (224 A.D. – 651 A.D.). In this period the dap was played in order to accompany Iranian classical music. Daps were likely used in the court to be played in the modes and melodies of traditional music. This traditional or classical music was created by Barbod the Great and was named the khosravani after the mythical king Khosrow. Recent research reveals that these modes were used in the recitation of Mazdean (Zoroastrian) prayers. The modes were passed down from master to student and are today known as the radif and dastgah system. Many of the melodies were lost, but most of those that remain date to the Sassanid period. Dafs can be played to produce highly complex and intense rhythms, causing one to go under a trance and reach an ecstatic and spiritually-high state. For this reason, they have always been connected with religion in Iran.

The art of daf playing in Iranian Kurdistan and other parts of  Iran has reached us by the effort of Iranian Sufis; especially in the 20th century. The daf still functions as an important part of Persian art music (traditional or classical music) as it did in ancient times. It successfully encourages many young Iranians to take up learning this ancient instrument.

The dayereh is an instrument that is used to keep the rhythm of the music. This instrument is smaller than daf. The membrane is made of goatskin stretched over a wooden ring. Along the edge of the dayereh there are several pairs of loosely attached metal disks, which produce short crisp sounds as the player strikes the dayereh with the wrist and the fingers. Traditionally, the dayereh is a female instrument. It is sometimes used on festive occasions.

The defi (sometimes called daire in other areas) is a fairly large frame drum with metal bangles. Similar to a tambourine in construction, the defi is made with a metal screw system so that the head can be tightened and tuned. It is popular in many forms all over Greece, especially in the mainland klarino music. The defi is particularly popular in the Epirus region of northwestern Greece, where they are still handmade today. They have a low tone, and the bangles are low pitched as well.

In the history of Iran, daf had important usage specially in celebrations. There are a lot a poems in Persian that mention the daf.

A daf is a Middle Eastern frame drum. Like other frame drums, it is designed with a head diameter greater than the depth of the shell of the drum. The daf is an ancient instrument that originated in the Middle East and has many different names and variations in many countries. It is most popular in Iran and Greece, where it was first played. It can also be found in ancient Persian and Kurdish rituals, and the popular and classical music of many countries.

The daf has many different styles and can be played in many different ways. It is famous for its clear sound and low tone. Many dafs feature ringing bells and plates around the edges in a tambourine-like style. The daf is, like many hand drums, made of bent wood with animal skin stretched over. The shell of the drum is generally sturdy and hollow. It is constructed different than many simple frame drums in that its drum head is fixed with metal tuning screws to alter the pitch and tone of the notes. These screws offer changes in the low, musical tones of the drum.

The different kinds of daf dictate the style of play and the sound of the music. A solo daf is used in solo performances and has a generally clear sound. An orchestra daf is larger and has a soft sound. A summer daf has skin not covered loosely on the shell and a winter daf has skin stretched tightly, to give the instrument a different timbre. Like the tambourine, the daf can be played in one hand while standing, or between the legs while sitting down like the bongo. It can be played with a multitude of different finger taps and claps or with a mallet.

As well as many different kinds of dafs, there are many related instruments worldwide. These variations include: the defi, the daire, and the dap. The daf, though, has remained the most popular around the world, especially in Iran, where it is the second national drum, behind the tonbak.

The daf has been very important in Persian and Iranian culture throughout the ages. Its importance predates the advent of Islam, and played a strong part in religion and art music at that early time. It has since occupied a spiritual role in the many rituals and ceremonies of Iranian and Kurdish life. The daf was introduced to the West through Spain in the 15th century and since has permeated the rest of Europe, and has found a small niche in the United States with specialty instrumentalists.