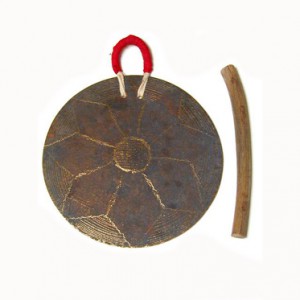 Chengila, or cennala ,is a kind of gong that helps the singer keep time in many traditional art forms of Kerala including Kathakali. It is a thick bell-metal disc hung by a strap looped through one wrist and struck with a short stout wand in the other hand. The range of sounds is limited. Struck when hung freely, it produces a ringing sound, while a flat tone is produced when it is in contact with the forearm that holds the instrument.

The chengila is a percussion instrument that maintains a steady beat and provides musical background. The thick bell metal disc, which hangs by a strap looped around one wrist, is struck by a short wand held in the other hand. A ringing sound is produced when the chengila is struck when hanging freely; a flat tone is produced when it is struck while held against the forearm. A ringing sound is manufactured when the instrument is struck with a stout wand when hung freely, while a flat tone is manufactured from the instrument when it is in contact with the forearm of the player that holds the musical instrument.

In Kerala, a state in south-west India, the chengila is used in many different traditional art forms including Chemmanakali, Kalthakali, and Krishnanattam.