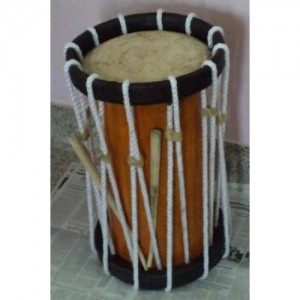 The Chenda is a cylindrical percussion instrument used widely in the state of Kerala, Tulu Nadu of Karnataka and Tamil Nadu in India. In Tulu Nadu it is known as chande.

It is a cylindrical wooden drum, and has a length of two feet and a diameter of one foot. Both ends are covered with the “Chenda_Vattam”. The animal skin is usually of a cow, in a traditional Chenda other skins are not used, to have a quality sound the skin from the abdominal part of the cow is taken. This instrument is suspended from the drummers neck so that it hangs vertically. Though both sides can be used for playing, only one is actually beaten. Using two sticks, the drummer strikes the upper parchment.

This instrument is famous for its loud and rigid sound. A Chenda has two sides, the left side called “Edamthala” and the right side “Valamthala” . The “Edamthala” is made of only one/two layer of cow skin and the “Valamthala” will have a five/seven layer skin, so as to have a bass sound. The skin are dried under shadow and fastened on wooden rings made of the trunk of a locally available palm tree or bamboo, using a gum prepared from the seed of a tree called “pananchi maram”. The circular frame is kept in a vessel and boiled for a whole long day and then bended in the form of circle and drying it up. The body of the Chenda which is 2 ft 36 inches diameter and 1.5 inches thickness is made of the soft wood of the jackfruit tree. The thickness is again reduced by 0.25 inches, at simultaneous points separated by 4 inches. This is done in order to produce highly resonating sound. Only the wooden rings with the skin  is replaced once the quality of the sound is not up to the mark. For regular Chenda artistes an average of 15 rings are required every year.

The Chenda is mainly played in Hindu temple festivals and as an accompaniment in the religious art forms of Kerala. The chenda is used as an accompaniment for Kathakali, Koodiyattam, Kannyar Kali, Theyyam and among many forms of dances and rituals in Kerala. It is also played in a dance-drama called Yakshagana (Tenku Thittu) which is popular in Tulu Nadu of Karnataka. There is a variant of this instrument used in northern school of Yakshagana called Chande. It is traditionally considered to be an Asura Vadyam which means it cannot go in harmony. Chenda is an unavoidable musical instrument in all form of cultural activities in Kerala.

In Kerala the craft of making Chenda is now associated with some few “Perumkollan” (smith) families at Peruvembu, Nemmara, Lakkidi[disambiguation needed], Vellarkad and Valappaya villages. Many famous Chenda percussionist in Kerala make there Chendas from Vellarkad village for it is famous for the quality of the instrument.

Depending upon the size, structure and function of the Chenda, they are classified as, “Veekku_Chenda”  or “Acchan_Chenda”, “Uruttu_Chenda” , “Muri_Chenda” etc.

“Uruttu_Chenda”  is used to play variations in music. It is used to lead the orchestra. It is called the “”Pramanavadhya”” (Leading instrument). The “Chenda _attam”  of the “Uruttu_Chenda” is always the “Edam Thala” or the “Left Head” which is made of soft, single cow skin. The meaning of “uruttu” in Malayalam language is “rolling”. The artist produce sound on “Uruttu_Chenda” by rolling his right hand wrist. During the first beat the palm holding the stick will face the artist (in), then during the second beat (using the same right hand) the palm would face the opposite side. This is done by rolling the wrist.

“Veekku_Chenda” or “Acchan_Chenda” is used to keep the “thalam”  or the basic rhythm. The “Chenda_Vattam” of the “Uruttu_Chenda” is always the “Valam Thala” or the “Right Head” which is made of multiple layer of skin to produce a bass sound. The meaning of “Veekku” in Malayalam language is “beating hard”. The artist produce sound on “Veekku Chenda” by hitting the drum using a stick without twisting or rolling his wrist.

A “Chenda Melam” means percussion using Chenda. The Chenda is used as a percussion instrument for almost all Kerala art forms like Kathakali, Kodiyattam, Theyyam etc. Chenda melam is the most popular form in Kerala, for more than 300 years. A Chenda melam is an integral part of all festivals in Kerala. There are 7 types of “melangal” viz Panchari melam, Champa, Chempada, Adantha, Anchadatha, Druvam and Pandy melam. The earlier 6 melams are called “Chempada melangal”. Other than these seven “melams”” two more melams are there in Kerala “Navam” and “Kalpam”.

A Chenda is taught in a traditional way, the students have to practice on a stone or wood using a strong and thick stick usually made of tamarind tree bark. The learning stick would be 29cm in length, 3 cm in diameter on one side and 2.5cm on other side of the stick. Once the learning on stone is finished, students learn on Veekku Chenda or the Valam Thala part of the Chenda which is made of multiple layer of skin. The “Valam Thala Chenda” is played using a long and thin stick. Once the students master to play on “Valam Thala Chenda”, the students start learning on the Uruttu Chenda or the Edam Thala part of the Chenda which will have only one layer of skin.

In Kerala a traditional Chenda learning always start and end with a “Ganapathi Kai”, it is a prayer and dedication done to the Hindu god Ganapathi.

A “Ganapathi Kai” consists of 37 beats.