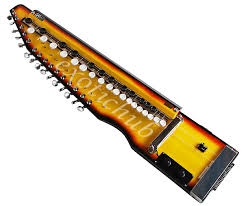 The bulbul tarang literally “waves of nightingales”, alternately is a string instrument from India and Indian and Pakistani Punjab which evolved from the Japanese taishogoto, which likely arrived in South Asia in the 1930s.The instrument employs two sets of strings, one set for drone, and one for melody. The strings run over a plate or fretboard,while above are keys resembling typewriter keys, which when depressed fret or shorten the strings to raise their pitch.

How to play Bulbul tarang? 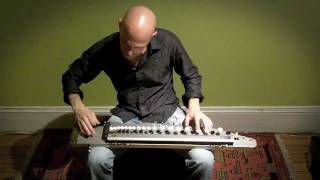 How to play Bulbul Tarang
1/1

How to make Bulbul tarang instrument? 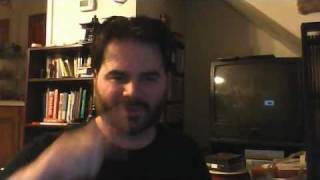 How to make Bulbul tarang instrument?
1/1

The Indian version is sometimes known as the “Indian banjo” or “Japan banjo”, due to its descent from the taishokoto; similar instruments in Germany and Austria are known as akkordolia, and in Pakistan as benju. In the Maldives it is known as a kottafoshi, and as medolin (pronounced “mendolin” after the mandolin) in the Fijian Indian diaspora.

A more complicated and electrified version is known as the shahi baaja.

The Bulbul Tarang (aka Indian Banjo) is a 15 string instrument common in India and Pakistan. The instrument employs three sets of strings – a double set of melodic strings and two sets of drone strings.

The bulbul tarang (bulbul tara for some) is a musical instrument that is difficult and easy at the same time. Difficult because hardly anyone makes or sells it any more. Easy because it’s simple to play with a limited tone range, so even a child can learn it in a matter of minutes.

Not surprisingly, the few who now own a bulbul tarang would have, in all probability, acquired one during their childhood. K.G. Jawahar, for instance, got his about 40 years ago. For Rs. 7.

He’s now 54 and on a mission to introduce it to youngsters before becomes music history. A bank employee, Jawahar has been playing the bulbul tarang at institutes and orphanages in the state regularly.

“If someone calls me, I go. I don’t charge any fee. I play without an accompanying instrument as that would overpower the bulbul tarang,” he says about the piano-style keyboard instrument that he carries in a case labelled ‘Bul Bul Rani Jawahar’, named after his late wife.

The Bulbul also contains a variety of other deep-sampled articulations, including drone strings in both minor and major scales, muted notes on melodic strings, tremolo, trills and a wide assortment of FX. Additionally we also added a large phrase collection to the library focused on strums. The strums comes both as multi-samples and as phrase-samples, so you can create the ideal soundscape depending on your needs.