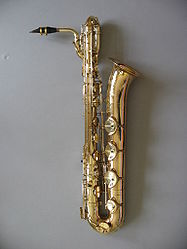 The baritone saxophone or “bari sax” (commonly abbreviated bs or bars to distinguish it from the less frequently used bass saxophone) is one of the largest members of the saxophone family, only being smaller than the bass, contrabass and subcontrabass saxophones. It is the lowest-pitched saxophone in common use, and uses a mouthpiece, reed, and ligature that are larger than the tenor, alto, and soprano saxophones, the other commonly found members of the family. The baritone saxophone is commonly used in classical music (such as concert bands, chamber music, and solo repertoire), military bands, marching bands, and jazz (such as big bands, jazz combos, etc.).

The baritone saxophone was created in 1846 by the Belgian instrument maker Adolphe Sax as one of a family of fourteen instruments. The saxophone was created to be a tonal link between the woodwinds and brasses, which Sax believed to be lacking. The family was divided into two groups of seven saxophones each from the soprano to the contrabass. The family consisting of saxophones ranged in the keys of B♭ and E♭ were more successful because of their popularity in military bands. The bari sax, pitched in E♭, is the fifth member of this family.

The baritone saxophone, like other saxophones, is a conical tube of thin brass. It has a wider end, flared to form a bell, and a smaller end connected to a mouthpiece.

The baritone saxophone uses a single reed mouthpiece like that of a clarinet. There is a loop in the neck to reduce it to a practical height. The baritone sax comes in two sizes with one ranging to low A and the other to low B♭.

It is a transposing instrument in the key of E♭, pitched an octave plus a major sixth lower than written. It is one octave lower than the alto saxophone. Modern baritones with a low A key and high F♯ key have a range from C2 to A4. Adolphe Sax also produced a baritone saxophone in F intended for orchestral use, but these fell into disuse. As with all saxophones, music is written in treble clef.

The baritone saxophone is used as a standard member of concert bands and saxophone quartets. It has also been occasionally called for in orchestral music. Examples include Richard Strauss’ Sinfonia Domestica, which calls for a baritone saxophone in F; Béla Bartók’s The Wooden Prince ballet music; Charles Ives’ Symphony No. 4, composed in 1910-16; and Gershwin’s Rhapsody in Blue and An American in Paris. In his opera The Devils of Loudun (Die Teufel von Loudun), Krzysztof Penderecki calls for two baritone saxes. Karlheinz Stockhausen includes a baritone in Gruppen.

It has a comparatively small solo repertoire although an increasing number of concertos have appeared, one of these being “Concerto for Saxophone Quartet and Orchestra” by American composer Philip Glass. This is a piece that can be played with or without an orchestra that features the baritone sax in the second movement. 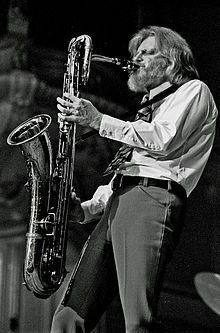 A number of jazz performers have used the baritone saxophone as their primary instrument. It is part of standard big band instrumentation (the larger bass saxophone was also occasionally used up until the 1940s). One of the instrument’s pioneers was Harry Carney, longtime baritone player in the Duke Ellington band.

Since the mid-1950s, baritone saxophone soloists such as Gerry Mulligan, Cecil Payne, and Pepper Adams achieved fame, while Serge Chaloff was the first baritone player to achieve fame as a bebop soloist. In Free Jazz Peter Brötzmann is notable. 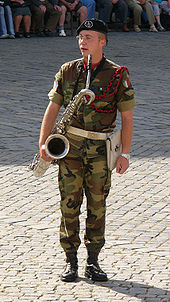 Baritone saxophonist in a military band of the Italian army.

The baritone sax is an important part of military bands and is common in musical theater. The baritone sax plays a notable role in many Motown hits of the 60s, and is often in the horn sections of funk, blues, Latin and soul bands. It is sometimes also used in rock music. Prominent baritone saxophonists in contemporary American popular music include Steve Kupka of Tower of Power and Dana Colley of Morphine. Nigerian Afrobeat singer, musician, and bandleader Fela Kuti typically featured two baritone saxophone players in his band.