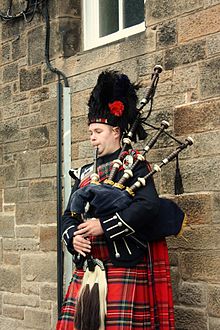 Bagpipes are a class of musical instrument, aerophones, using enclosed reeds fed from a constant reservoir of air in the form of a bag. Though the Scottish Great Highland bagpipe have the greatest visibility in the English-speaking world, bagpipes have been played for centuries (and continue to be played) throughout large parts of Europe, Bulgaria, Serbia, Turkey, the Caucasus, around the Persian Gulf and in Northern Africa, and some parts of North America. The term “bagpipe” is equally correct in the singular or plural, although in the English language, pipers most commonly talk of “the pipes”, “a set of pipes” or “a stand of pipes”.

A set of bagpipes minimally consists of an air supply, a bag, a chanter, and, usually, at least one drone. Most bagpipes have more than one drone (and, sometimes, more than one chanter) in various combinations, held in place in stocks — sockets that fasten the various pipes to the bag.

The most common method of supplying air to the bag is through blowing into a blowpipe, or blowstick. In some pipes the player must cover the tip of the blowpipe with his tongue while inhaling, but most blowpipes have a non-return valve that eliminates this need.

An innovation, dating from the 16th or 17th century, is the use of a bellows to supply air. In these pipes, sometimes called “cauld wind pipes”, air is not heated or moistened by the player’s breathing, so bellows-driven bagpipes can use more refined or delicate reeds. Such pipes include the Irish uilleann pipes, the Scottish border pipes and Lowland pipes; Northumbrian smallpipes, pastoral pipes and English Border pipes in Britain, and the musette de cour in France.

The bag is an airtight reservoir that can hold air and can be used to regulate its flow, enabling the player to maintain continuous sound. The player keeps the bag inflated by blowing air into it through a blowpipe or pumping air into it with a bellows. Materials used for bags vary widely, but the most common are the skins of local animals such as goats, dogs, sheep, and cows. More recently, bags made of synthetic materials including Gore-Tex have become much more common. However, a drawback of the synthetic bag is the potential for fungal spores to colonise the bag because of a reduction in necessary cleaning, with the associated danger of lung infection.[1]

Bags cut from larger materials are usually saddle-stitched with an extra strip folded over the seam and stitched (for skin bags) or glued (for synthetic bags) to reduce leaks. Holes are then cut to accommodate the stocks. In the case of bags made from largely intact animal skins the stocks are typically tied into the points where limbs and the head joined the body of the living animal, a construction technique common in Central Europe.

The chanter is the melody pipe, played with two hands. Almost all bagpipes have at least one chanter; some pipes have two chanters, particularly those in North Africa, the Balkans in Southern Europe, and Southwest Asia. A chanter can be bored internally so that the inside walls are parallel (or “cylindrical”) for its full length, or it can be bored in a conical shape.

The chanter is usually open-ended, so there is no easy way for the player to stop the pipe from sounding. Thus most bagpipes share a constant, legato sound where there are no rests in the music. Primarily because of this inability to stop playing, technical movements are used to break up notes and to create the illusion of articulation and accents. Because of their importance, these embellishments (or “ornaments”) are often highly technical systems specific to each bagpipe, and take many years of study to master. A few bagpipes (such as the musette de cour, the uilleann pipes, the Northumbrian smallpipe, and the left chanter of the surdulina, a type of Calabrian zampogna) have closed ends or stop the end on the player’s leg, so that when the player “closes” (covers all the holes) the chanter becomes silent.

The note from the chanter is produced by a reed installed at its top. The reed may be a single (a reed with one vibrating tongue) or double reed (of two pieces that vibrate against each other). Double reeds are used with both conical- and parallel-bored chanters while single reeds are generally (although not exclusively) limited to parallel-bored chanters. In general, double-reed chanters are found in pipes of Western Europe while single-reed chanters appear in most other regions.

Most bagpipes have at least one drone: a pipe which is generally not fingered but rather produces a constant harmonizing note throughout play. These drones have reeds just like in the chanter. Exceptions are generally those pipes which have a double-chanter instead. A drone is most commonly a cylindrically-bored tube with a single reed, although drones with double reeds exist. The drone is generally designed in two or more parts with a sliding joint so that the pitch of the drone can be adjusted.

Depending on the type of pipes, the drones may lie over the shoulder, across the arm opposite the bag, or may run parallel to the chanter. Some drones have a tuning screw, which effectively alters the length of the drone by opening a hole, allowing the drone to be tuned to two or more distinct pitches. The tuning screw may also shut off the drone altogether. In most types of pipes, where there is one drone it is pitched two octaves below the tonic of the chanter. Additional drones often add the octave below and then a drone consonant with the fifth of the chanter.