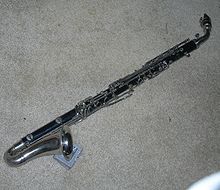 The alto clarinet is a woodwind instrument of the clarinet family. It is a transposing instrument pitched in the key of E♭, though instruments in F (and in the 19th century, E) have been made. It is sometimes known (in Europe) as a tenor clarinet, especially for the instrument in F. In size it lies between the soprano clarinet and the bass clarinet, to which it bears a greater resemblance in that it typically has a straight body (made of Grenadilla or other wood, hard rubber, or plastic), but a curved neck and bell made of metal. All-metal alto clarinets also exist. In appearance it strongly resembles the basset horn, but usually differs in three respects: it is pitched a tone lower, it lacks an extended lower range, and it has a wider bore than most basset horns. 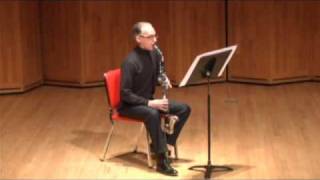 The range of the alto clarinet is from the concert G or G♭ in the second octave below middle C (i.e. bottom line of the bass clef) to the middle of the second octave above middle C, with the exact upper end of the range depending on the skill of the player.

The invention of the alto clarinet has been attributed to Iwan Müller and to Heinrich Grenser, and to both working together. Müller was performing on an alto clarinet in F by 1809, one with sixteen keys at a time when soprano clarinets generally had no more than 10-12 keys; Müller’s revolutionary thirteen-key soprano clarinet was developed soon after. The alto clarinet may have been invented independently in America; the Metropolitan Museum of Art has a bassoon-shaped alto clarinet in E♭, cataloged as an “alto clarion”, attributed to an anonymous American maker circa 1820. This instrument bears a strong resemblance to the “patent clarions” (bass clarinets) made from about 1810 by George Catlin of Hartford, Connecticut and his apprentices. Later, in Europe, Adolphe Sax made notable improvements to the alto clarinet.

Albert Rice defines clarinets in G with flared bells, which were produced as early as 1740, as alto clarinets, but this use of the term is uncommon.
Use in musical ensembles Soon after its invention, Georg Abraham Schneider composed two concertos (Op. 90 and op. 105) for Müller’s instrument and orchestra. Generally, however, the alto clarinet has not been commonly used in orchestral scoring. It is used mostly in concert bands and plays an important role in clarinet choirs. A few jazz musicians, Hamiet Bluiett, Vinny Golia, J. D. Parran, Petr Kroutil, Joe Lovano and Gianluigi Trovesi among them, have played the alto clarinet. In his Treatise on Instrumentation, Hector Berlioz said that while the alto clarinet has a distinctive sound, “unfortunately it is not to be found in a well-constituted orchestra.”

The “alto” clarinet is in Canada referred to as the “tenor”. Certain members of the clarinet family are named differently from the US as in Canada. The high E♭ is the soprano, the B♭ and A the alto, the E♭ the tenor, the low B♭ the bass.

In the late 1940s, there was some discussion over whether the alto clarinet should be eliminated from the standard wind band. Arguments used include its relatively low volume and that its part is often doubled by other instruments, and the expense. Because of this, publishers of band music for elementary and junior high school players tend to leave parts out for alto clarinet. Mature bands utilizing more sophisticated arrangements quite often have a seat dedicated to alto clarinet, so in the majority of American high school and college bands,a complete family of clarinets is encountered in the modern wind band.